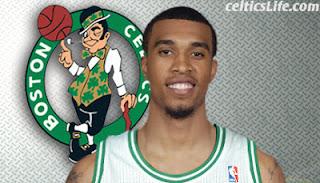 Not the type of accolade that Courtney Lee was looking for. Lee has been named a starter on SI.com's All-Disappointment Team joining Deron Williams, D.J. Augustin, Ersan Ilyasova, and Andrea Bargnani. Here's what Sports Illustrated had to say about Lee:

Fits between team and player rarely come cleaner than the meeting of Lee, a skilled and versatile combo guard who plays solid on-ball defense, and the Celtics, a team that needed Lee’s fill-the-gaps dynamism to boost their offensive potential. Lee may not be prolific enough from the perimeter to replace Ray Allen outright, but he seemed a fitting substitute for a team that has every incentive to get younger and quicker as to best prolong the careers of Kevin Garnett and Paul Pierce.

That’s a quaint notion, but hasn’t quite worked out in practice. Lee is making a career-low 28 percent from three-point range, and at his absolute best has been a functional stopgap for Boston’s second unit. His complementary game has grown so agreeable as to be completely bland, and his most prominent defensive limitations (his inability to body up opponents and fight through screens) are only accentuated by playing with the Celtics’ second-unit big men. It’s been a hard fall for Lee, and a strange one; I’d bet on Lee’s figuring out the proper calibration of his offensive game at some point down the line, but for now he’s hardly living up to his presumed role within the Celtics’ reboot.


Sort of a strange pick in my honest opinion. I try to be objective and not simply be just a blind homer, but I think the SI author, Rob Mahoney,  is being a bit harsh on Lee. He received an MLE contract (not big money) to play a reserve role for the Celtics. His shot hasn't been falling, but that's not really something that deserves that much criticism. It's not like you can get shots to fall with greater effort (And if I'm correct he's shot much better of late after a rough start to the season). Now if he wasn't putting forth effort on defense that would be one thing.

Guys that I view as disappointments tend to be players that could be so much more if they tried harder. For example if Rasheed Wallace had been in better shape for the Celtics and posted up more (and chucked less 3's) he would have been awesome. Or if Jeff Green was only about scoring his points and crashed the boards like Jared Sullinger, Leon Powe, or Antoine Walker, he'd be viewed in a much greater light by me and many other Celtics fans.

Courtney Lee isn't shooting a good percentage this season so far. From everything I've heard, it's not from a lack of shooting reps after practice, before games, etc. I don't view him as the biggest disappointment on the Celtics this season, let alone a top 5 disappointment in the entire NBA. What are your thoughts?