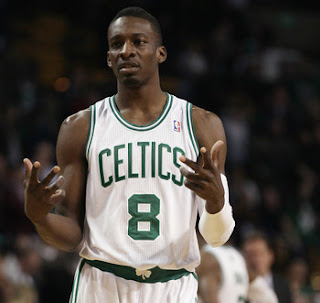 There's been some talk about Jeff Green's minutes, as in "he is doing well for how much he plays" and "would put up good numbers if he played more."

This begs a comparison to other players of somewhat similar talent level to see if he is putting up "good" numbers for the amount of time he is on the court. For this exercise, Green will be compared to other small forwards playing within two minutes of green's average.

Every one of those players, besides Butler who is having a terrible year and being outplayed by Matt Barnes, is putting up better numbers than Green in at least two of those categories. Outside of Beasley, Green is more talented than all those players.

Those are Brewer numbers. A guy who has never been much more than a defender.

I'm not trying to hate on Green. I loved the trade with Kendrick Perkins. I got it.

They had to trade Perkins because he refused the offer on the table from the Celtics and he was going to walk at the end of the year anyway. Why not get something for an often hurt center and a possible replacement for Paul Pierce at that? Even now that makes sense to me.

But this is about results and right now Green isn't giving much of them, minutes or not. Coming into this year, Green had to be a major piece of this team if they were going to have any kind of success.

Both Kevin Garnett and Pierce have lost a step or two and Rajon Rondo has yet to take the next step. Green is far from the only reason this team is 14-13, but he is one of the big ones and the team is depending on him to contribute at a high level.

As for the heart issue, this guy is getting paid millions of dollars to play. If he cannot do it or getting back up to speed has been an issue then he needs to say that, so the Celtics can put in someone else who will produce until he is good to go.

If not, if he is fine, then I don't want to hear about the heart surgery. This is not tiddlywinks, this is professional basketball. I'm glad he came back healthy, but how long can fans use that as an excuse? I know he isn't.

And anyone who wants to bring up the heart surgery better not criticize Chris Wilcox for anything since he also had heart surgery MONTHS after Green did and he was back on the court playing this season.

The real question is: When is the right time to criticize Green? He looks very similar to the guy that finished the 2010-11 season after the trade to Boston and before the surgery: 9.8 ppg, 3.3 rpg, 0.7 apg in 23.5 minutes per game.

Then the argument was, well he doesn't know the system. Now, it's the heart surgery and minutes and some still use the system excuse. But that is all they are, excuses.

Do we have to wait for Pierce to retire and Green to average 17 ppg in 35+ minutes on a losing team before we can say something?

The contract he signed earlier this year, four years and $36 million, lends itself to criticism. If you are going to pay a guy starter's money, is it so much to ask that he play like one? Of course, most of the blame for that goes to Danny Ainge for giving out one of the worst contracts of all time (Bill Simmons called it the first contract in history that was unmovable the second it was signed).

I hold out hope that maybe one of these excuses is true and given a "real" opportunity, Green will flourish. Right now, the Celtics don't need Green to be a franchise player, but they need him to be better than Corey Brewer.