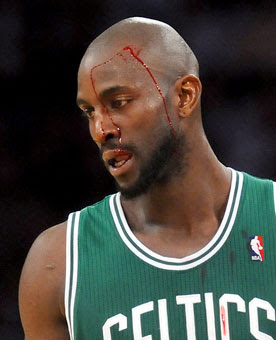 There are a lot of CSNNE reporters I like. Michael Felger in not one of them. He's openly stated he doesn't like the Celtics or the NBA, yet CSNNE gives him a major platform to discuss the NBA. Yesterday he was going off on how KG ran away from Gerald Wallace and would lose a fight to any hockey player.


"I would take, almost literally, anyone in the NHL over Kevin Garnett. For one simple reason. When was the last time Kevin Garnett got hit in the face? Anyone who fights for a living, or is used to getting hit, is going to take down the guy who has never been hit. It's just a truism, I don't care how big you are."


I know Felger is just a "propagator" to use Tommy Heinsohnism, but he's also an idiot. He thinks Farragut Academy in Chicago is some rich private school. I went to college in Chicago, the murder capital of the U.S.A. Farragut is no private school and it's located on the West Side of Chicago, which is much more dangerous than even the South Side. Trust me Farragut is no walk in the park.

2nd idiot statement that Felger makes is how KG has never gotten into a fight in the NBA so he's not a fighter. No fool, the NBA will suspend you for double digit games (or a season) if you connect on blows in a fight and you'll destroy your team and lose multiple millions in salary. You think NHL players would still get in fights if they lost millions each time and their teams suffered for it?

But that's not all... Felger also argues that no one wants to fight the 6'7" Zdeno Chara, because of his reach. Yeah and the 6'12" KG and NBA players don't have long reaches? Look I'm a big Chara fan and Bruins fan. I know that hockey players can fight, but NBA players are NOT ALLOWED TO FIGHT, while NHL players are encouraged to. It's like comparing apples to oranges. You don't think that if they could that Rondo or KG wouldn't have popped Kris Humphries in the mouth the other night? You get suspended for pushing. For throwing punches you get a bigger suspension. For connecting on a punch you get double digit games. And so on. Again the NBA has a zero tolerance policy on throwing punches.

Felger hates the NBA. We get it. CSNNE shouldn't give him the platform to spew his hate. If Felger really thinks NBA players can't fight then he should get David Stern to grant Zach Randolph, Kendrick Perkins, Ron Artest, KG, whoever a waiver to fight the loud mouth basketball hater Felger and see who runs away. Or for starters why doesn't he go walk around outside Farrgut Academy in Chicago and propagate there how hockey players would whoop all basketball players in fights.