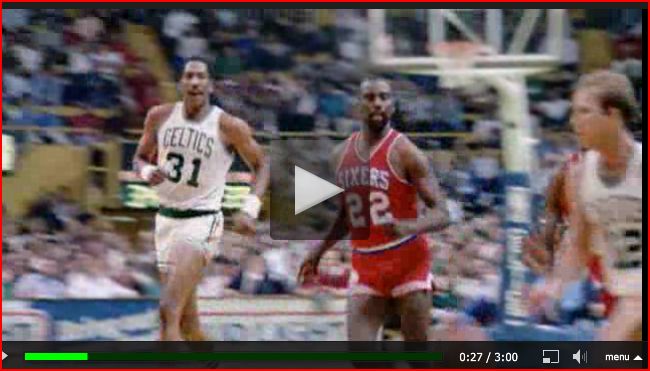 Imagine for a moment a top 15 player in the NBA was given the rights by his team to come and film a movie in which he plays for the Celtics. Think of James Harden today. Now what if I told you this actually took place?

It did in a movie called Amazing Grace and Chuck, and why there's so little coverage on it today is beyond me. I remember seeing this film a long time ago when NBA Star Alex English, playing the role of Amazing Grace Smith, suited up wearing #31 for the Boston Celtics. I remembered it to this day, but hadn't seen it in forever. And now here it is. Yes that's the real Jerry Sicthing and Rick Carlisle and Andrew Toney and Danny Vranes defending Amazing Grace. Red Auerbach even makes an appearance.

This happened during a preseason game on Friday October 10, 1986, with the Celtics as defending champs.   The Nuggets granted English the right to play for the Celtics for the purposes of this movie.  English played the first 2:28 of the second quarter and left to a huge ovation!  Here's the vintage clip:

The movie itself, is about a little league pitcher Chuck, who doesn't want to play baseball anymore after learning about nuclear weapons. Grace Smith is a star basketball player for the Celtics, who learns of this, and decides he is going to give up playing as well. For Alex, it was a bizarre experience, as he recalls:


“It was kind of weird,” English said of wearing a Celtics uniform in the movie, despite playing in real life for the Denver Nuggets. “The best experience was just being here in the summertime for a week and a half. Auerbach was still here. I was hanging out with him for a few minutes. That was good. He was always respectful of my game.” “The character I played was a 3-point shooter, and I’m not a 3-point shooter,” English said. “I put them up. When you look at the movie, they all go in. I think I only made one.”

Here's an awesome blurb about the game: 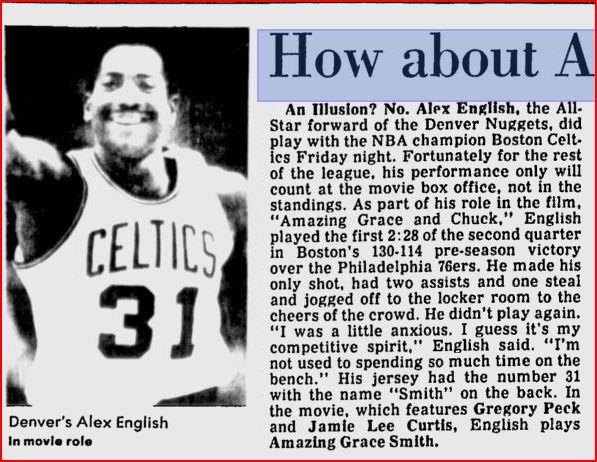 And here's the famous boxscore itself! 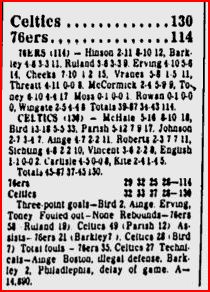 Frankly if I was coach KC Jones that night, I definitely would've wanted to play English more than Fred Roberts.  And apparently Dennis Johnson agreed:

Because Larry Bird had drawn his fourth personal foul in the first quarter of this practice game, there was almost a hint of temptation in Jones to leave Alex in longer. "Dennis (Johnson) mentioned that," smiled English later.  "He said 'Now you're going to get some real minutes.'"

Apparently at half-time of the game the NBA staged an informal press conference and Alex had some more to add:

I was honored to play with the Celtics and they were very warm in receiving me. However I was reluctant to intrude on their domain.  I stayed out of their locker room during the pre-game talk. They were gracious enough to allow me to wear their uniform.


I loved Alex English as a kid. A big-time player, it was really cool to see this footage. So enjoy it. And don't expect to see James Harden anytime soon filming a movie during a preseason game at the TD Garden.