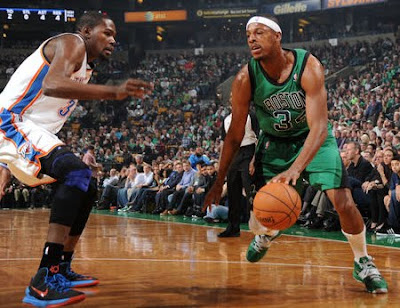 Year after year, Paul Pierce has been a foundational rock for the Boston Celtics. Throughout his career, he has filled a myriad of roles and willed his team to wins in the clutch, but his game has evolved over time. Always a crafty player, "The Truth" has fine-tuned his post game, hesitation dribble, ball fakes, step-backs, and jump shot in order to stay competitive despite his waning athleticism. This season, the Celtics Captain has been utilized in an unprecedented amount of screen plays, contributing to his high 3-point percentage and perhaps his relatively low field goal percentage (more jump shots means more misses). This article breaks down his scoring plays over the last 4 years.

Doc Rivers has wisely developed a new system to limit wear and tear on Pierce's body, as well as Kevin Garnett's, in order to keep the 2 veterans fresh and effective. Though Pierce can't get to the rim as easily as he could in his prime, he can still put pressure on the defense and finish with his soft touch. His transition scoring is actually higher than it has been in recent seasons, an encouraging sign that he is in top-shape and ready for the grind of an 82 game season.

Just like Kobe Bryant or Michael Jordan before him, Paul Pierce has maintained his conditioning and innovated, with the help of Doc Rivers of course, new ways to be effective. He can still hold his own against the Kevin Durants of the league, and thus The Truth has aged like fine wine.