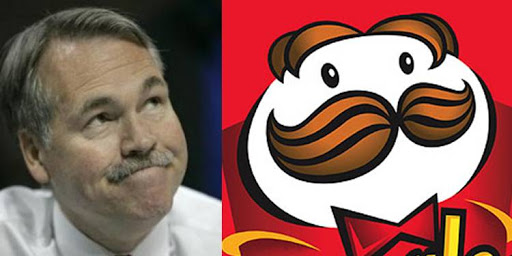 The Lakers said they plan to hold a press conference most likely on Tuesday or Wednesday. Team spokesperson John Black said Lakers owner Jerry Buss, executive vice president Jim Buss and general manager Mitch Kupchak were "unanimous that D'Antoni was the best coach for the team at this time."

Sources confirmed a Los Angeles Times report that D'Antoni quickly agreed to coach the Lakers after L.A.'s weekend of negotiations to bring back Phil Jackson broke down.

It appears that Whistlin' Phil wasn't up for another go around. I hate to say it, but I think this is a good hire for the Lakers. D'Antoni is a great basketball and obviously is familiar with Steve Nash. D'Antoni almost won a championship in Phoenix, but the whole Amar'e/Diaw leaving the bench fiasco sidetracked that. If he had won that championship he'd be looked at in a much greater light (like Doc Rivers is for example).

Lakers should be scary good offensively under Mr. Pringles and with Dwight Howard he has an elite defensive stopper. Lakers could have done worse with this hire, which is unfortunate because I wanted them to do worse. Then again I think that Phil Jackson would have made them even more formidable, so I'm glad he declined the position (or the Lakers didn't cater to all his demands).

What are your thoughts?