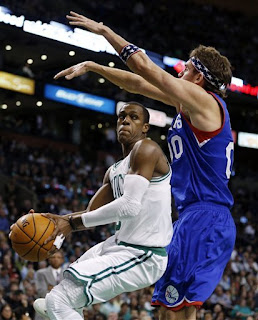 The Celtics dropped to 2-3 on the year with a  loss to the young and athletic 76ers.  This is a difficult one to gauge. Philly is a much better team than the Wizards, and we did show heart in coming back and outplaying them in the second half. At the same time, by me saying that last sentence it basically implies that the Celtics aren't a contender.

It's only been 5 games, but I already am as disappointed in Jeff Green as I've been with any Celtic in recent history. He did nothing tonight with just 4 points on 1-5 shooting. I was on the "Jeff Green is going to be awesome bandwagon", and you can count me as officially off it. Not necessarily because he hasn't played well, but because he doesn't seem to have any passion.

KG and Rondo continue to play great which is no surprise. Rondo had 14 points and 19 assists though he did allow Drue Holiday to have 21 points and 14 assists himself. KG had 19 and 10 but only took 13 shots. KG needs to take more shots for us to win consistently.  Pierce led all scorers with 24 points on 8/16 from the field. The problem as always was the supporting cast. Terry played pretty well with 13 points but Bass, Lee, Green, and Wilcox were non existent.

This Philly team is good even without Bynum.  They will be a 4 or 5 seed in the East.  Evan Turner looks like he is finally showing his potential and Drue Holiday is just a really good point guard that doesn't get his due. Dorell Wright and Thaddeus Young are both solid players as well pitching in 15 points.

Tough loss for the Celtics, but an even tougher season thus far. The defense looks really bad and I'm not sure why. Losing Ray Allen was supposed to HELP our defense.  I am normally the most optimistic Celtics fan around, but I have to honestly say I am very disappointed by what I have seen thus far. Let's hope they can find that Celtics magic soon and turn this around.