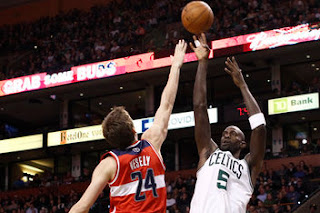 The Celtics swept their home-and-home series against the Washington Wizards. Boston needed overtime to best the opposition on their home floor, but survived by a score of 100-94.

Bass was on the court for most of the end of regulation and for all of overtime. After appearing to lose his starting role to Jared Sullinger, this was a big showing for the veteran power forward.

With the score tied at 88, Rajon Rondo clanged a three-pointer at the end of regulation, allowing the game to see the extra period.

The Celtics had a decent lead for most of the second half, but started settling for jump shots inside of four minutes. That quickly caused their lead evaporate. Kevin Seraphin's dunk knotted things up at 80, around the three-minute mark.

Kevin Garnett was whistled for a technical foul after stealing the ball from Seraphin and getting fouled. After free throws were sorted out, the score was again tied at 84. It was a one-minute ball game from there.

After a Rajon Rondo jumper, Chris Singleton buried a pair of freebies and a running dunk to tie it back up with just under 10 seconds on the clock.

The Captain struggled shooting, but showed guile in competing on defense and working his way to the free-throw line. Pierce finished with 15 points and 10 rebounds, but added four steals late in the game.

Though Jason Terry stated he wanted the Celtics' bench to beat the opposition this week, Boston's crew fell short. However, thanks to Terry's 16 points, the bench was able to keep up with Washington enough for the starters to win the game in the end.

Also of note, Chris Wilcox was a sight for sore eyes. The Celtics' big man played just four minutes, but came up with six big points, going 4-of-5 from the line.

Rondo inched one game closer to history. His 14 assists marked the 28th straight game he has reached double-digits in the stat. He now stands just one game behind John Stockton's streak of 29 games, but still has a ways to go to catch Magic Johnson's 44-game run.

The Celtics improved to 2-2 on the season. Washington, still playing without John Wall and Nene, remained winless at 0-3.

Boston returns to action on Friday night at the TD Garden. They will take on the Philadelphia 76ers in their first Atlantic Division contest at 7:30.