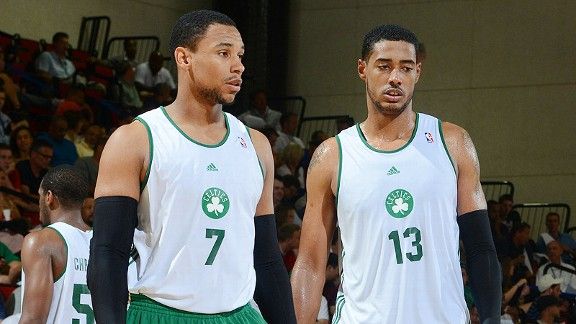 Sounds like Kevin Garnett is acting as the big man coach to Celtics rookies Fab Melo and Jared Sullinger.


That was indeed the case on Sunday when Garnett spent some post-practice time with Boston's young bigs.

And to their credit, they were more than eager to soak it all in.

"For him to step out at the end of practice, knowing he's probably tired and just speaking upon us about things we can do better and work on means he's a great teammate," said Jared Sullinger, Boston's first-round pick out of Ohio State. "He's been great so far. I don't expect it to change. It means a lot to us young guys."

Some of the younger players were apparently not communicating enough in practice on Sunday, so Garnett did what KG tends to do and that is to show and tell them exactly what he's looking for and what the C's will need.

In addition to Sullinger, Fab Melo was attentive to Garnett's teachings as well.

"Oh man, it's great," said Melo, who like Sullinger was was drafted in the first round last June. Melo came out of Syracuse. "Everyday, I watch him play and try to learn everything that he does. After practice, he come to us and explains the stuff we had problems
with. It's great."

But with those explanations comes expectations, Melo said.

That's not a problem for Melo or Sullinger.

"You know he's doing all this to help you get better, to make us a better team," Sullinger told CSNNE.com. "That's why I said earlier, he's a great teammate."

One thing you can't say about KG is that he's not a great teammate. He might do some crazy shit out there and ruffle feathers, but the guy loves the game of basketball and loves his teammates. Having Garnett around for the first few years of Sullinger's and Melo's careers can only accelerate their learning curve. Perkins, Big Baby, Powe, Bass, Stiemsma, even old friend Semih. The list goes on of Celtics bigs that have thrived playing next to KG. If you're willing to listen, you can only get better playing with him.