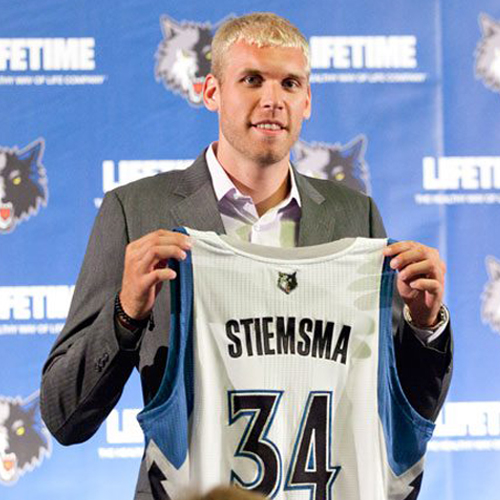 No this is not an Onion piece or an Afternoon Delight. This is real news out of Minnesota.

According to the Minneapolis Star-Tribune, this year's squad will be the league's whitest since the 1980s Boston Celtics.

Is that a problem?

Some civil rights leaders in Minneapolis think so. Tyrone Terrell, chairman of St. Paul's African American leadership council, told the Star-Tribune that he thinks the unbalanced roster could be seen as a ploy by the ownership to sell the team to a majority-white fan base.

"How did we get a roster that resembles the 1955 Lakers?" Terrell said to the Star-Tribune. "I think everything is a strategy. Nothing happens by happenstance."

Indeed, while the team lacks as many African-American players as most other squads, the Timberwolves are still quite diverse. Five of their ten white players were born outside of the United States.

Ron Edwards, a longtime Minneapolis civil rights advocate, told the Star-Tribune that it was "somewhat disturbing" when he saw a game last season in which Wes Johnson was the only black player on the floor for the Timberwolves. The composition of this season's roster has prompted Edwards to react even stronger.

"It raises some real questions to me about what's really intended," Edwards said. "I think, personally, that it was calculated. Is this an attempt to get fans back in the stands? Minnesota, after all, is a pretty white state.''

Edwards added that the Timberwolves' roster decisions are a "nullification of diversity and a reversal of history."

Kahn said the Timberwolves targeted two black players as free agents during the summer. But Portland matched Minnesota's offer to Nicolas Batum, and Jordan Hill opted to re-sign with the Lakers at less money for a better chance to win a championship.


I know a lot of bloggers are scared to post on race issues, but we try to be as real as we can on here and not just post PC fluff pieces, so here are my thought on this. (Switches to my Tommy Heinsohn voice). Gimme a break! Do you think the Wolves signed Stiemsma over LeBron? The vast majority of black NBA players don't have Minnesota on top of their preferred wish list. The team tried to overpay for Batum, but the Blazers matched. You know what gets people in seats? Winning teams. The Wolves would love to have a young KG to build around. Minnesota fans loved him ten times more than any player (including the white ones) that has ever played for the organization.

The Wolves GM is an incompetent bozo, but he's not a racist, incompetent bozo. People used to get on Danny Ainge that he loved white players too much (Raef, Wally, Jiri, Dickau, etc), now the Celtics almost have a full black roster (head coach too). So if Danny didn't sign Darko, would he have suddenly switched from a racist to a Black Panther or something now? Of course it's all nonsense. So is this stuff in Minnesota. The Wolves would gladly trade all their white players for a winning team. And lastly when did racists start loving Puerto Ricans? Do you think Kahn was like, "I hate black people, so I'm go to go in an industry that is majority black? And I hate black people so I'll sign a Puerto Rican point guard? Yeah I know us racists are supposed to dislike Puerto Ricans too, but he's light skinned!" Drivel.