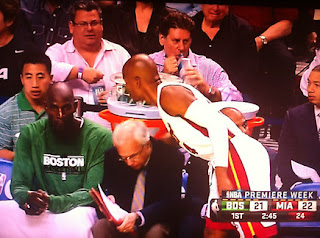 The raising of their championship banner did not cloud the goals of the Miami Heat on Tuesday. They defeated the Boston Celtics 120-107, on the NBA's opening night.

Emotions ran high in the battle between the two rivals who's last meeting was Game 7 of the 2011-12 Eastern Conference Finals.

LeBron James and Dwyane Wade didn't miss a beat in leading the Heat, scoring 26 and 29 points, respectively. James also added 10 rebounds. As a team, Miami shot 55 percent from the field.


Boston fell behind in a bad third quarter. It was punctuated by Miami stretching the lead to 17 at the tail-end of the frame. Jeff Green was beat badly by Rashard Lewis after an inbounds pass with just three seconds on the shot-clock.

Speaking of Green, he looked a whole lot like the Jeff Green from 26 games in 2010-11. The Celtics' highly touted reserve finished with just three points and missed all four of his field goal attempts.

Boston was bolstered late in the game by Leandro Barbosa. A surprising fourth-quarter spurt from the Celtics' newest member got Miami's lead down to nine at the eight-minute mark, and kept it in that range. Barbosa finished 6-for-8 for 16 points, all in the final frame.

James left the game with cramps, returning to the Heat locker room for treatment. With him off the floor, Boston put together a series of mini-runs trying to get back into the game.

A Kevin Garnett and-one, on an assist from Rajon Rondo, cut the Heat lead to just eight with four minutes on the clock.

Back to back fast break buckets - one Rondo to Barbosa, the other Rondo to Courtney Lee - cut the deficit to just four with two minutes to go.

Still, Chris Bosh's free-throw shooting provided the final nails in the Celtics' game-one coffin. He connected on 3-of-4 from the line and threw one down to push the lead back to double-digits.

Ray Allen did everything you remember him doing, just for the opposition. He finished with 19 points on 5-of-7 shooting, including two threes.

Rondo was fantastic, as was Paul Pierce, but many of their teammates fell flat. Boston, who finished 2011-12 as the league's second-best defense allowed the Heat to score at will throughout much of the game.

Rondo put up 20 points, 13 assists and seven rebounds, while Pierce led the Celtics with 23 points.

Brandon Bass had a somewhat quiet double-double, with 15 points and 11 boards. He didn't play a factor in the fourth quarter. Garnett had some big buckets late, but finished with just nine points and 12 rebounds.

Kris Joseph, Chris Wilcox, Darko Milicic and Jason Collins were active, but did not see the court.

Boston is now 0-1 on the 2012-13 season. They are off the next two days before their home opener at the TD Garden in Boston on Friday night. That game is against the Milwaukee Bucks and tips off at 7:30.