Always a Celtic, no matter how West 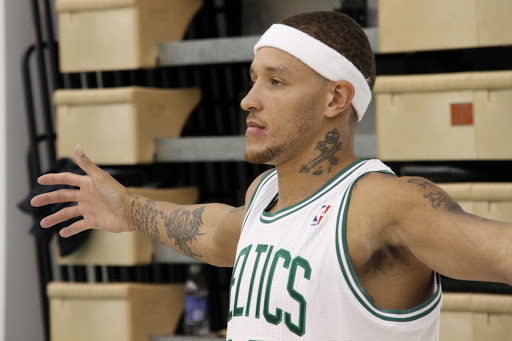 Delonte West has always been a Boston Celtic. That sentence is well understood and shared by all Celtics fanhood. That doesn´t mean that he is going to return to the team of his soul soon.

When you say Delonte West among Celtics fans, you experience the same kind of thrill as if you were told that Kendrick Perkins may be let go by the Thunder tomorrow. You feel that excitement of possibly welcoming back a brother into your house for dinner. It is that thought of warm friendship brought back after a long period of time without meeting.

As you all know by now, Delonte´s future in Dallas is in jeopardy. He is been suspended for conduct detrimental for his team for the second time in the last days, meaning he could be cut by the Mavs soon. The recent pick up of Eddy Curry by Dallas after being let go by the Spurs put Delonte´s future in Texas in danger.

You know you would like West back in the Celtics. The guy is tough as nails, has an ability to shoot and score at will and is a great teammate. As I write this now, I wish there was a roster spot available for him but I am afraid there is currently no room for him in the current roster. As a matter of fact, even recently signed Leandrinho Barbosa has very few minutes available after Avery Bradley´s return in December.

It won´t matter, Delonte will always know that Boston is his home and that eventually in the future the roads may align for a second return to the Celtics. For now we all wish luck to one of the most loved players in the recent history of this team.

Hope to see you soon in Green, D West.