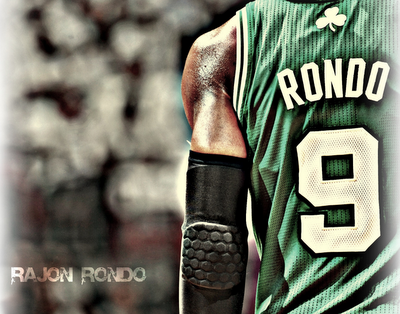 Yahoo Sports' Marc Spears has a nice piece on Rajon Rondo today on the team practices in L.A, on Ray Allen, and more.

The Boston Celtics spent last week in enemy territory, daring to venture into Los Angeles to spend some time together. They scrimmaged at UCLA, ate lunch at Roscoe's Chicken & Waffles and hung out at the homes of Paul Pierce and Kevin Garnett. They even played flag football.

The event planner for the week of bonding was point guard Rajon Rondo. After an offseason in which his maturity was questioned and his relationship with former teammate Ray Allen was scrutinized, Rondo wants to show he can lead the Celtics. One of the first steps was welcoming a couple of new teammates – Jason Terry and Courtney Lee – to Boston's L.A. retreat.

"I wanted J.T. to play with Kevin. I wanted Courtney to see how Paul likes to play. I wanted Paul and Jeff Green to go at each other," Rondo told Yahoo! Sports. "I wanted to play with those guys. It was getting guys away from our actual training facility to get a new view.

"I wanted the guys to have fun. When you're with me I want you to say, 'Man, I had a good time with Rondo.' And I think that's what they did."

"People act like because me and Ray didn't get along or they think me and Ray didn't get along that I'm a bad person or he's a bad person," Rondo said. "No. It's just life. If you look at your job, everyone doesn't always get along with every co-worker they work with. It's just part of life. People are blowing the Ray thing out of proportion. We had some words, but other than that it was no big deal.
"There were so many rumors like I was looking Ray off. Why would I look Ray off? That doesn't make sense. He's the best shooter, so why would I look him off? People can see it how they want to. They can talk to Ray. But from my standpoint, he made his decision. I don't know why he made the decision, but he made the decision. I don't think it had anything to do with me."

We've already discussed how great it was that Rondo organized these practices, but it's great to hear from Rondo himself. For someone who's maturity has been questioned in the past, he seems to be "getting it" now.

Also, this is the first time either Rondo or Ray has discussed their friction. Rondo's view is the same as my initial reaction. So what if he and Ray got into it? Teammates are like brothers. Brothers sometimes fight. And Rondo is the league leader in assists. He's not going to freeze out Ray on offense. If it wasn't for Rondo, Ray's 3-point total wouldn't be quite as high. Rondo's a pass first point guard, which was great for Ray.

Allen has moved on and we have Terry and Lee now. We're better off. Whereas Ray refused to talk publicly about the Rondo riff (and instead allegedly leaked stuff passive aggressively to the media), Rondo is being upfront and honest here and doesn't deny they had beef and doesn't give a lame "no comment." I like it.