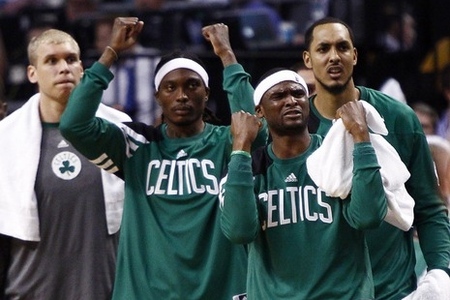 
On Thursday evening, the Celtics announced that Keyon Dooling was being waived.

All indications are that the 12-year veteran plans to retire.

“Keyon has decided that he has given the NBA 12 good years and that it’s time to pursue other interests and spend more time with his family,” Dooling's agent, Kenge Stevenson, said in a statement. “He will never forget his time in Boston with the Celtics.”

Keyon was by and large a better contributor as a team leader than as a player for the Celtics last year. Let's be realistic, he was the subject of much ire from Celtics fans for most of the season. However, he eventually won his way into the hearts of many C's fans with his pregame speeches and "flexing" on the bench (see picture above).

With the additions of some quality guards this offseason, this move does make a lot of sense. After the Darko Milicic signing, it was looking very unlikely that Summer League star Dionte Christmas would have a shot to make the roster. This opens it up for him.