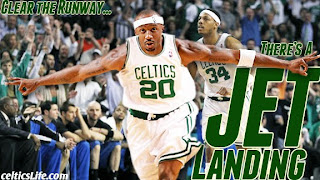 I loved the pick up of Jason Terry. Ever since I started watching him play I've nicknamed him "Dagger Three" because all he does is hit those threes that just crush the hearts of opponents. I also love him because of his enthusiasm, confidence, and loyalty to any team he plays for.  The guy has already gotten a leprechaun tattoo on his forearm. Respect.

What I like about him most of all is that he embraces the 6th man role. I was a 6th man back in high school and always liked being the first guy off the bench.  Terry brings a ton to the table for the Celtics. Every team needs that gun slinger off the bench who can hit big shots. Terry can do that and can handle the ball should Rondo need some rest.  He has championship experience with the Mavs and seems to have already fit in nicely with the Celtics culture. He doesn't back down from anyone and I can see him and KG getting along quite nicely. I think Terry may be one of my favorite Celtics when all is said and done.

It remains to be seen what Terry can do for the Celtics, but I for one am very excited to see "Dagger Three" in Green and White. As Mike Saver said " you really couldn't have asked for a better replacement for Ray Allen". Sure, he's not the all time leading three point shooter of all time, but I'd argue he's a better clutch shooter right now than Ray. Looking forward to many a dagger 3 against Lebron and the rest of the NBA this season. Welcome to Boston Jason Terry!