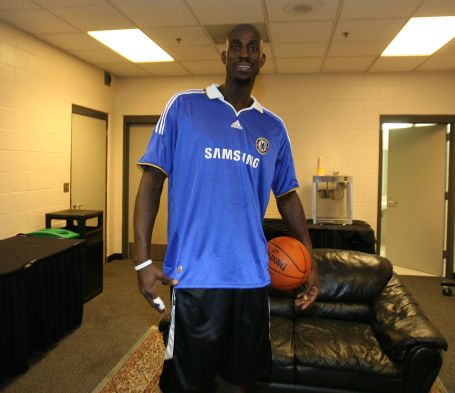 Late last year we got a tip from one of our readers in Rome that Kevin Garnett was part of an investment group purchasing AS Roma Soccer Club. The Boston Globe later confirmed the report (didn't give us any credit, but whatever), but today the Globe is reporting that the NBA blocked KG's ownership bid.

Kevin Garnett has a strong rooting interest in soccer, Chelsea and AC Milan his preferred clubs. There are several US-based owners of major European clubs, and Garnett last year decided to join them by agreeing to chip in to AS Roma. About the same time, LeBron James joined Fenway Sports Group, which controls Liverpool FC.

When the teams met last month in an exhibition at Fenway Park (Roma beat Liverpool, 2-1) it was revealed Garnett had been excluded from financial involvement with Roma. The NBA blocked the move because AS Roma’s principal investor is Celtics part-owner James Pallotta.

“If you enter into a business agreement with the owner of a team that doesn’t involve playing service, there are potential problems,” a league source said. “Maybe not in this case. But there is a chance of, say, making a contract a lot larger.”

James is allowed to invest in Liverpool because Fenway Sports Group has no connection with the NBA.

“With LeBron, there is no tie-in whatsoever, so it’s a different deal,” the source said. “It’s like having a business relationship with Nike. We make it simple — you can’t have a business deal with your team, or any other team, because there is the possibility of an underhanded deal there. It’s pretty clear-cut.”

Just another case of LeBron getting preferential treatment. Just kidding. I actually completely understand this ruling as the conflict of interest is extremely obvious. Not that Pallotta and KG would act on it, but just that it's there. I'm sort of surprised that KG and his attorney actually thought the NBA would consider an exception. That was never going to happen.