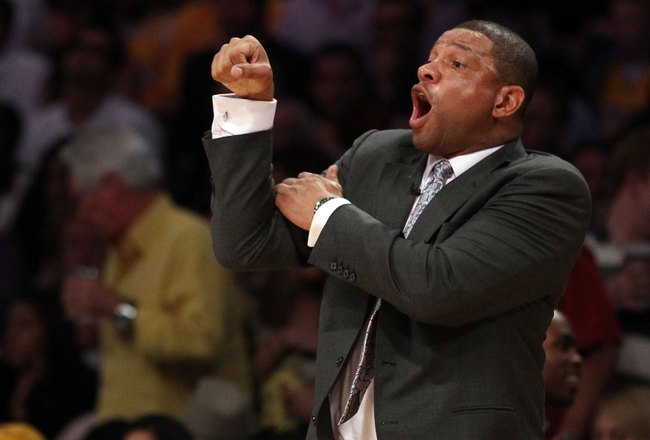 Another must read Doc Rivers article from Adrian Wojnarowski, this one is full of a very candid Doc talking about the reason Ray left, a lot of them are the rumors that were reported recently. Doc also says he takes full blame for Ray Allen's decision to leave.

Essentially what Doc says is Ray left for a few reasons.

Doc says that he takes full responsibility for almost all of the above, after all most of the things that upset Ray were his decisions. Still, Doc stands by it. He said that he tells the team every year he is going to do what's best for the team, not the individual.

"As a coach, you've got to do what's best for the team. If guys don't like it, they're going to leave. If they stay and don't like it, well, your team's going to suck anyway. Even if this happens, you still have to do it. You can't coach worrying about any individual. You've got to coach worrying about your entire team: Whether that gets you a championship or whether that gets you fired."

He also says that he was mad at Ray at first for leaving, not because he was going to the Miami Heat, but because he thought he was leaving for the wrong reasons.

Whatever issues the public had with Allen leaving for a rival, Rivers says those never entered into his frustration. "I was pissed at him," Rivers said. "I was pissed at him for his reasons for leaving. But what people don't get: I wasn't pissed at him for leaving for Miami. I could care less he went there. And that's a fact. With the fans, I know it was: How could he go to Miami? But once he decided he didn't want to stay with us, he has the right to wherever he wants."

Rivers has come to realize that Allen's leaving was inevitable and his return would've only exasperated the issues and made for an untenable situation in Boston. Shooting guards Jason Terry and Courtney Lee were signed in free agency, and they'll replace Allen.

"For a week or two, I was really disappointed, pissed, because I thought it was for all the wrong reasons," Rivers said. "It was more about himself, his team. And then, I realized: Well, it should be about himself. It was free agency. I wasn't thinking right.

There's still a lot of disdain in Boston for Ray Allen leaving, but after hearing the reasons straight from Doc Rivers, you kind of see how it would not have worked out for Ray to stay. The locker room would have been very chaotic. As Doc says in the article, his role won't be much different in Miami. However, it's easier to sign somewhere else and do that than to have that taken away from you.