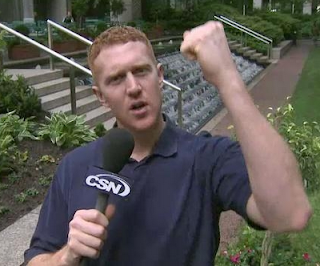 
I caught up with Scal the other day as he was doing an appearance at the Chicago Bulls/Sox Academy in suburban Lisle. He’s got an offer in Europe, but now has a family with two kids. He doesn’t want to leave them. He’s got a nice TV offer in Boston after doing TV playoff work. Friends say to take it and don’t look back. But Scalabrine isn’t exactly someone who ever listened to the consensus. Because if he did, he never would have been in the Finals four times, eight times in the playoffs, and with more than a decade in the NBA totalling about $20 million in contracts.

“I’d be discouraged if I just quit,” said Scalabrine, who remains without an NBA team after being told by the Bulls he will not be invited to return. “Everyone keeps telling me it’s not quitting (taking an already offered TV job). But I want someone to tell me, ‘We don’t want you.’ I’ve always been a tough cut to make. I want someone to tell me I’m not good enough. I just want to see what happens.”

If you're a Scal fan the whole nba.com column is worth a read. Bringing Scalabrine back to Boston to work for CSNNE is a no brainer. He's knowledgeable, funny, and viewers actually like him (So three things that Tanguay doesn't have). I don't fault Scal for wanting to give the NBA one more crack. He can always do tv work, but playing professional sports has a brief timeline.

Loved this quote from Scal in the column:

"I don’t care if people think I’m not good. It doesn’t bother me. Because I think I am a good player. I know the game. And even now if someone says I suck as a broadcaster, I’m not going to be offended. “The way I look at it is if that’s the case (people are mocking me), then—and no disrespect—you’d have to be an idiot,” he says, getting just a tiny bit red other than in his hair. “That I won some contest to be in the NBA? Or that I don’t have to fight every day? That I’m not the first guy on the floor and the first in the weight room and the last to leave? That I haven’t been waking up 5:30 my whole life to train? I’d have to think you’d are an idiot to think I’m a joke. They might, which would be disappointing. Maybe it is that. But I know why I’m here.”

Best of luck Scal in winning another NBA roster spot. When you finally hang those sneaks up, please come back to your adopted home, Boston.