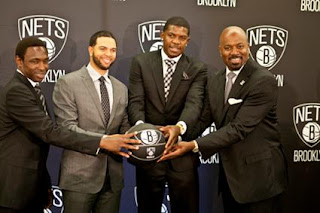 No division in the NBA has improved from last year as much as the Atlantic. It may be a stretch to think all five teams are playoff-bound. However, it isn't far-fetched to think that four of the five teams will be in the postseason come next spring.

Therefore, each week we'll preview one of the five teams that make up the division and see if any of the other four can unseat the Boston Celtics atop the Atlantic to earn a top-four seed. Boston has finished in the top spot for the past five straight seasons.

First up is the Brooklyn Nets who finished last in the division at 22-44 last season. They were 17 games behind first-place Boston. Their most recent Atlantic Division title came in 2006. 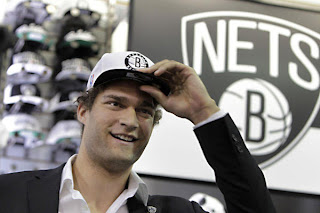 2011-2012 Notes:
Allowed 99 points per game while scoring just 93. Finished 26th in the NBA in rebounding. Deron Williams led the team in scoring with 21 points per game, and added 8.7 assists. Kris Humphries grabbed 11 rebounds per game, good for fourth in the league. Lost center Brook Lopez for all but five games due to a foot and ankle injury. In March, New Jersey completed a trade with Portland for Gerald Wallace. The Nets parted with Mehmet Okur, Shawne Williams, and the first-round pick that would become Damian Lillard (6th). On April 23rd, played the franchise's last game in New Jersey, a 105-87 loss to Philadelphia. Team will now play at the brand new $1 billion Barclays Center in Brooklyn. Basketball capacity: 18,103.

A New Beginning:
For the Nets, Brooklyn represents a new beginning. New Jersey was a franchise that made it to just two conference finals in its history. While the same franchise is playing in neighboring New York now, everything has a different feel to it.

Brooklyn is sure to be the exciting and sexy new place to be in the NBA next season. With Jay Z as their off-the-court face, the hip black and white color scheme and logo will be plastered on flat-brims and T-shirts all over the country before you know it. Not to mention the new Brooklynettes.

Going along with the new vibes being sent out of the Atlantic's cellar dwellers, the team has made some exciting moves in the offseason in an attempt to immediately contend both in the division and conference. The biggest move of all was the trade for Joe Johnson, but we'll get to that shortly.

First, Brooklyn found themselves in a similar situation to the Celtics. They had a lot of free agents on their own team who needed to be dealt with before other teams could sink in their teeth. Namely, Deron Williams and Brook Lopez.

Lopez became a restricted free-agent at the end of June and Williams was unrestricted after turning down a $17.7 million player option. Brooklyn quickly went about resigning both players to big deals. Lopez agreed to four years at $61 million, while Williams got the star treatment of a five-year, $98 million deal.

Next up was the man they dealt a first-round pick for, Gerald Wallace. The 30-year-old veteran inked a four-year, $40 million deal that same day. More recently, they re-signed rebounding machine Kris Humphries for two years and $24 million.

To round out the team, the Nets reached small deals with free-agents Reggie Evans, Jerry Stackhouse, C.J. Watson, and brought Bosnian forward Mirza Teletovic into the NBA. Through some more creative work, they did come out of the 2012 NBA draft with three second-round picks. Kansas point guard Tyshawn Taylor has probably the best chance to contribute, but they also got Tornike Shengelia out of the nation of Georgia and Ilkan Karaman from Turkey.

An improved 2012-2013 season will require their biggest acquisition to have a big season. That means Joe Johnson will have to adjust to his new team quickly. The Nets sent five role players and a future first rounder to Atlanta in exchange for the star shooting guard.

Johnson will enter the season at 31 years of age, and coming off two of the least productive seasons of his career. This is of major concern, considering that he is owed roughly $89 million over the next four seasons. He scored 18.8 points per game last season, but did manage to connect on 39-percent of his threes.

He is still an elite scorer and pairing him up with an elite point guard like Williams makes for the best starting backcourt in the NBA on paper. A lot will depend on how the two mesh together. The rest of the unit has defined roles; Lopez is a great pick-and-roll scoring threat in the paint, Humphries is there to corral rebounds and get put-backs and Wallace is a versatile and athletic wing who excels defensively. Williams and Johnson are both gunners and that could cause some friction.

Williams may relish the opportunity though, since he has been pining for a fellow star to join him. Johnson is also the type of player who can fade into the background, which may actually be of benefit to this version of the Nets.

With a healthy Lopez and the introduction of Johnson, this team is already vastly improved and should make some noise in the Eastern Conference. Outside of MarShon Brooks, who provides excellent scoring in the second unit, the team's biggest weakness is depth. In the frontcourt, Reggie Evans is a nice piece but hardly enough. A lot will depend on Teletovic coming to the states and playing well, an idea that has had a shaky past in the NBA.

The bottom line is that the team is very much improved, but it far too front-loaded. Brooklyn is spending around $72 million on their starting-five (all back-loaded contracts), but the bench is suffering greatly. With the amount of money already spent, I'm not sure the Nets can afford to add good depth through remaining free-agents like Chris Andersen or Andray Blatche. The talent is not spread out enough for them to seriously contend deep into the playoffs.

Still this team will finish near the top of the standings in the Atlantic and a playoff spot is probable if the starting five stays healthy. I'd predict somewhere in the high 40s for wins and a third place finish in the division.