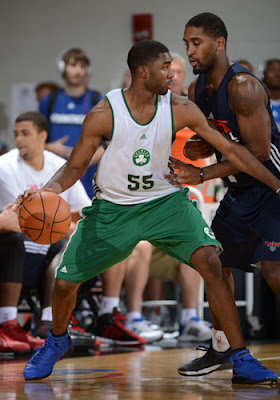 Less than a week after being traded from the Celtics to the Rockets in the Courtney Lee deal, E’Twaun Moore was waived by his new team according to Rockets.com.
Moore was one of the standouts on the Celtics' Orlando and Las Vegas Summer League teams prior to being moved last Thursday. He averaged 12.0 points, 2.4 rebounds, and 2.8 assists in five games in Orlando and 17.0 points, 3.5 rebounds, and 2.0 assists in two games in Las Vegas.

According to multiple reports, the Chicago Bulls are rumored to be interested in Moore.

Moore's non guaranteed contract made him desirable to the Rockets, who did not want to take on payroll to trade Courtney Lee. By NBA standards, Moore was making practically nothing, so I could of seen the Rockets holding on to him, but I guess they didn't see a future in him.

The trade could end up being a blessing in disguise for Moore as he can now go to a team of his choosing. Stellar Summer League stats rarely mean anything, but E'Twaun has shown me enough to think that he has a pretty good shot at sticking in this league.

For those wondering, the Celtics are not allowed to re-sign a traded player for a year.