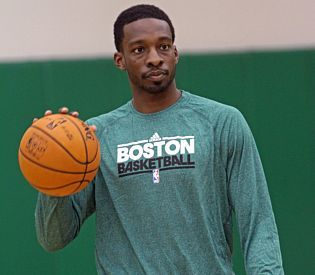 
While both sides have said repeatedly that they fully intend to enter into a contract soon, there's no mistaking that this deal has taken longer to become official than most anticipated after both sides had seemingly come to terms.

Apparently the snafu right now is the contract's language, which multiple league sources said on Wednesday should not stand in the way of this deal eventually becoming official.

"I'm not going to talk about what the hold up is," Danny Ainge, Boston's president of basketball operations, told CSNNE.com. "But we're involved in a negotiation that I think will get resolved soon."

Throughout the free agency process, Green's agent David Falk has reiterated that Boston has been his client's first choice.

"It's been a mutual love affair," Falk said. "They love having him here. He loves being here."

Look there's nothing to be worried about here Celtics fans. You don't go to a press conference announcing your return if you don't plan on returning. Initially I thought the hold-up was Green giving Ainge some flexibility in how the $36 million was allocated (in order for Danny to fill out this season's roster), but since our roster is essentially set now, not sure that that is the case anymore. Could it be insurance issues on the contract due to Green's heart surgery? Obviously that's just speculation, but that's what blogs are for. Anyone else have any plausible scenarios for the hold-up?