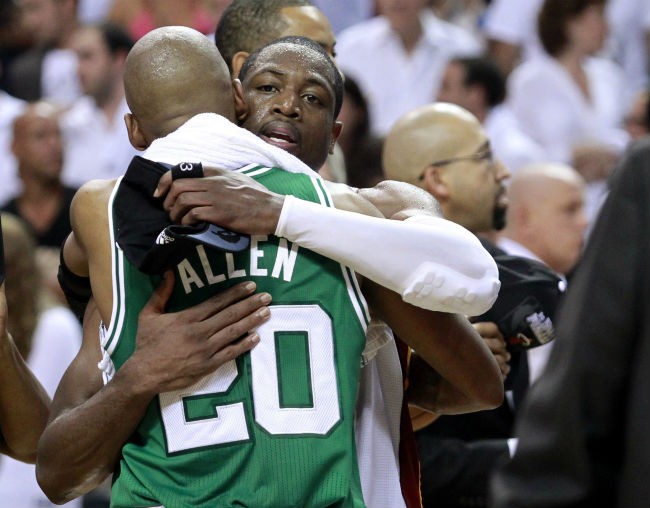 
Allen, tired of being offered as trade bait by Danny Ainge in each of the last two years, was also being offered trade security by the Celtics, either in the form of a trade kicker or a no trade clause.

But according to a league source, Allen’s request from the Celtics went beyond the pale - reportedly a demand for a three-year, $27 million contract. The Celtics, according to the source, were in the process of attempting to talk Allen down from $9 million to $6 million per year.

There are going to be a lot of reports that come out on why Ray left money on the table,"the best fans in the world" (his words), Doc, Paul, and Kevin to go play with LeBron and Wade in South Beach. Not all will be true, but just because you don't like what you're hearing doesn't necessarily mean it isn't true. When we reported that Ray was interested in the Heat initially, people called BS, that there was no way it was true. When we reported that people were saying that Ray and Rondo had friction, again people said there was no way that it was true. Sometimes the news isn't good.

Now that that's out of the way, you can decide whether Ray really was demanding 3 times as much to stay in Boston. My guess is he probably would have re-signed with Boston for something between the $12 million he was being offered and the $27 million he wanted. What's crazy is that in these situations, usually the player takes more to leave his team. Ray took less. Whereas Jason Terry brought his Celtics offer to the Mavs and was like, "Hey will you match this?" the Celtics not only were willing to match Miami's offer, but they were offering Ray more. AND a no trade clause.


Ray might think everything will be rosy in South Beach because LeBron, Wade and Riley stroked his ego, but things can change. They did the same with Chris Bosh to get him to sign for less there too and they've been throwing him under the bus for 2 years straight now. I wouldn't be surprised if the Heat trade Ray before his contract expires.

Regarding the "supposed" Rondo/Ray beef, if they have friction, so what? I've NEVER seen Rondo freeze Ray out of the offense. Ray will never find a better point guard to get the ball where he needs it then Rondo. You don't see Rondo wanting out because he doesn't get along with Ray? So Ray chose to leave Paul, KG, and Doc because him and Rondo aren't bosom buddies? If that's true then that's pretty weak in my honest opinion.

Look, Ray was a free agent and he was free to go wherever he liked (Just like LeBron was in 2010), but let's not sugar coat this any other way. Ray leaving to go to the Celtics' rivals and play for less was a big fucking diss to Boston and its fans. He's allowed to make that decision. But those reporters or bloggers that are on their soap boxes looking down at fans that are angry can go (insert something humorous here. I'm all out).

We offered him more money. We offered him a no-trade clause. He wanted South Beach. For all Ray's talk about loyalty and being pissed about hearing his name in trade rumors, well loyalty goes both ways. The loyal thing here was for Ray to remain here in Boston with Paul, Kevin, Doc, his no trade clause, and fans that adored him not only when he was making clutch 3's, but even when he struggled. He chose the glitz and golf courses of Miami. He chose to go to the defending champions, instead of trying to topple them in a rematch.

Thanks for the 2008 Finals Ray, but Celtics fans are pissed at you, and we're allowed to be.

Related: Poll: How do you feel about Ray Allen now?
Ray Allen agrees to sign with the Heat