Wojnarowski: Ray Allen specifically chose Miami to "stick it to the Celtics" 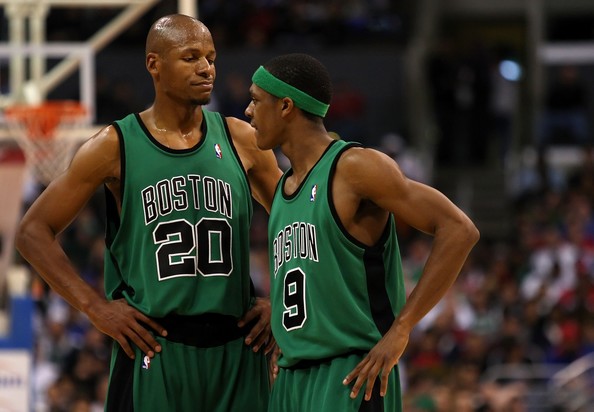 Adrian Wojnarowski is one of the best national writers out there. He usually has the scoops, so when I got wind that he was coming out with a lengthy column on Ray Allen's departure to the Heat, I was eager to read it. He has a lot on the deteriorating relationship between Ray and Rajon Rondo in there, but Ray's disenchantment with the Celtics was not all about Rondo. According to sources, Ray desired to feel more wanted. What he perceived as a lack of respect by the Celtics he then contrasted with Pat Riley's amazing sales job. I'm sure Riley fed him a load of BS with sprinkles of truth in there and apparently Ray bought it hook, line, and sinker.

Here's the most controversial part of the column where Wojnarowski (based on his sources close to Ray and within the Celtics organization) says Ray specifically chose the Heat as an act of "revenge." As a way to "stick it to the Celtics" for his perceived feeling of being disrespected.


When Allen left Miami on Friday, the Heat were unsure they had convinced him. He’s hard to read. They knew he’d fly home to New England, think it over, and it would still be so difficult for him to extract himself from the Celtics. Whatever the allure to Allen, his DNA was still made of loyalty and routine, and that still had to give Boston an edge.

Yet, it turns out Allen's trip to South Beach made him feel so wanted, so inspired, and, truth be told, so eager to stick it to the Celtics. He could've broken Boston's hearts and left for anywhere, but clearly there’s a part of Allen that wants to exact some kind of revenge on the Celtics. There was nowhere else to do that but Miami.

Man, that's some crazy stuff right there. Now I'm sure Ray would deny this. No one would ever be so stupid to voice their revenge motive publicly, but damn. The idea that he wanted the Heat, because it would hurt the Celtics the most is about as bad a thing as you can say about a guy. When Johnny Damon left the Sox for the Yankees, he did so because the Yankees offered more money. He gladly would have stayed in Boston for the same contract. Now imagine if Damon took less to sign with the Yankees and it came out that he did so to stick it to the Red Sox?

Anyway, in the words of I Love Lucy's Ricky Ricardo, "Ray you got some splainin' to do."

The whole column is worth a read: Heat gave Ray Allen reason to again feel wanted