And what about Nenad Krstic? 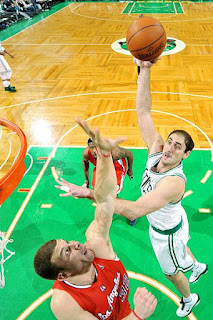 He was always the second part of that February trade everyone wants to forget about, the trade that altered the chemistry of the squad. Just as Nate Robinson, Krstic was the player that completed the deal but nobody really expected him to be a major part of what came later.

If only there had been a "later" part of what started back then.

Krstic left the NBA right when the shadow of the lockout fell on the league. Having signed a very lucrative deal with CSKA Moscow he had a very efficient and productive year.

Fast forward to the summer of 2012. Krstic is trying to go back to the NBA and according to the Serbian site novosti.rs the Celtics are among one of the three teams that are interested in hiring the center.According to the report the other two teams are the Milwaukee Bucks and the Brooklyn Nets. Krstic has a 15th July deadline to exercise his option on his second year with the CSKA.

Krstic would fill a need in the Celtics frontcourt and his signing (for a reduced contract) would help the Celtics economically since his current contract left a $8,314,674 cap hold for our team.