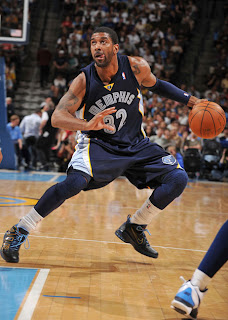 OJ Mayo has been linked to the Celtics for years, and as the Celtics build depth in the frontcourt, it is important for the C’s to add a capable high scoring guard to the roster that could come off the bench or start in the event of an injury. Mayo fits that description as a combo guard, a 6-4  guard with solid handle and the ability to run the offense for stretches when Rondo is on the bench.

Memphis appears ready to part with Mayo, as they have been shopping Mayo for at the last two trade deadlines, with 2 trades falling through at the last minute in consecutive seasons (Josh McRoberts, Indiana 2011 and Ray Allen, Boston 2012). In a surprising move today, The Grizz anounced qualifying offers for Darrell Arthur and Marresse Speights, but did not offer one to Mayo, making him an Unrestricted Free Agent all of a sudden.

Pro's and Cons after the jump.