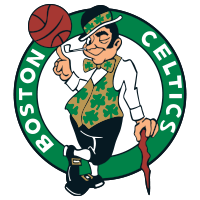 The Celtics bolstered their front court in the ﬁrst round on consecutive First Round draft picks in tonightʼs draft. Coming off one of the worst rebounding seasons in modern NBA history, the Celtics used picks number 21 and 22 to Draft Jared Sullinger(F, OSU, 6ʼ8) and Fab Melo(C, Syracuse, 7ʼ0), respectively. After Coach Doc Rivers started career Power Forward playing Center in Garnett playing alongside 6ʼ7 (at best) Brandon Bass, General Manager Danny Ainge has brought in some reinforcements.
More draft analysis after the jump Sullinger is coming off a dominant 2-year career at Ohio State putting up impressive
17.3/9.7/53% splits. He has been projected in the top ﬁve for the better part of the past
two seasons before a couple doctors raise red ﬂags concerning his back at a recent
combine medical screening. Assuming his back issues can be handled, the Celtics are
getting a low post scorer with a variety of moves around the hoop. One of the true back
to the basket threats in college basketball, Sullinger comes out of college as a polished
offensive player. At this point of the draft, it was tough for Ainge to ignore a player who has been a standout at every level throughout his life. His back to the basket game will give the C's an option to throw the ball down low and get a high percentage look, a dimmension they have lacked since Big Al was shipped out in the KG deal. 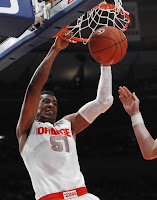 In Syracuseʼ Fab Melo, the Celtics are adding a full seven feet of Center to the middle of
the lineup. Though he comes to the league with a raw offensive game, at 7ʼ0 and 255
pounds, Melo brings a reﬁned defensive presence to compliment Kevin Garnett
(assuming he comes back) in the middle of the lineup. Melo carries some baggage with him into the NBA, as he missed the Orangemen's most recent NCAA tournament run due to a variety of academic issues. Garnett would be an excellent mentor as Melo adjusts to life in the NBA.

All things considered, Ainge indeed selected the big men that many Celtics fans coveted
heading into this offseason. If the Celtics brass can convince KG to return to anchor
their offense and provide needed leadership to the younger big men, the Celtics are
putting together a formidable roster to help build around Point Guard Rajon Rondo into
the future. These two ﬁrst round picks were an essential ﬁrst step for Ainge, and now he
has a little bit of ﬁnancial ﬂexibility for the ﬁrst time in recent memory to try to augment these new pieces with additional options for Doc and Rondo to work with.