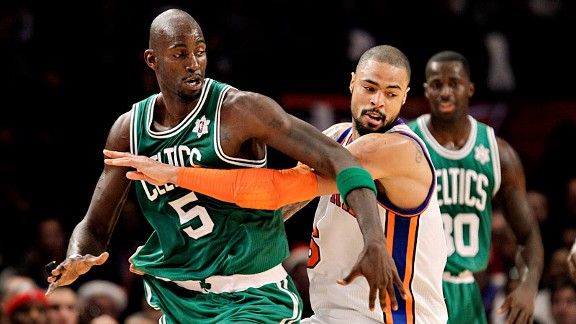 Celtics Life alumnus Eric Newman, a.k.a. "The Coach," recently interviewed Defensive Player of the Year winner Tyson Chandler for Dime Magazine. Of special interest to Celtics fans is when Chandler starts talking about KG.  You might already be aware that like many young big men, Chandler looked up to KG growing up. What's interesting from this interview is how KG inspired Chandler to up his defensive game in recent years. In fact, Chandler credits a conversation he had a couple years ago with then coach Larry Brown with inspiring him to change the Mavs defensive culture and lead them to a title.
The gist of the story is that Larry Brown was giving Doc Rivers props after a Celtics/Bobcats game on how strong the Celtics defense was. Doc told Brown that it's not like all of his players were known as defenders. That there was just one guy that forced everyone be a good defender. If you can't guess who that is, you haven't been watching the Celtics the past 5 years. Brown relayed the story to Chandler and when he got traded to the Mavs, he decided that like KG he would hold his teammates accountable on defense. The Mavs, for years a great offensive team, suddenly also started playing defense and won the title.
You can watch the KG portion of the Chandler interview after the jump. Also, great to see continued  success from one of the original Celtics Life columnists. You can check out more of Eric's videos at enewfilms.com. His upcoming documentary "NINE WEEKS ‘TIL 9/11" looks like a must see.