What the Hell Happened to...Ed Searcy? 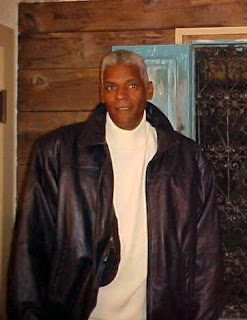 Often times in What the Hell Happened To, we cross paths with guys who had short stints with the Celtics.  Really short stints.  But it used to seem customary for guys who were on the team at the beginning of the season and were let go to still be awarded that championship ring if the team went on to win it.  Togo Palazzi proved it in 1957 and this week's WTHHT feature player, Ed Searcy proved it again during the 1976 campaign.

Ed started his career at Power Memorial High School in Manhattan (making him the 2nd WTHHT alumni of there along with Johnny Ezersky) alongside future NBA player Len Elmore.  For college he began his career at Duquesne.  Ed was one of the top recruits in the country and narrowed his selection of 150 schools down to two: Duquesne and Marquette.  Al McGuire and Marquette lost out to Red Manning.  Ed's quote at the time was:


I wanted to go to a school with a similar basketball background that the New York Colleges have.  But I didn't want to go too far away from home.  So I decided last week on Duquesne and Marquette- and Duquesne was closest to home.  I decided Pittsburgh had a better big city atmosphere than Milwaukee.  I liked Duquesne because they use a free-lance offense and a man-to-man defense and I hope to play in the pros someday- this is the kind of system I want. 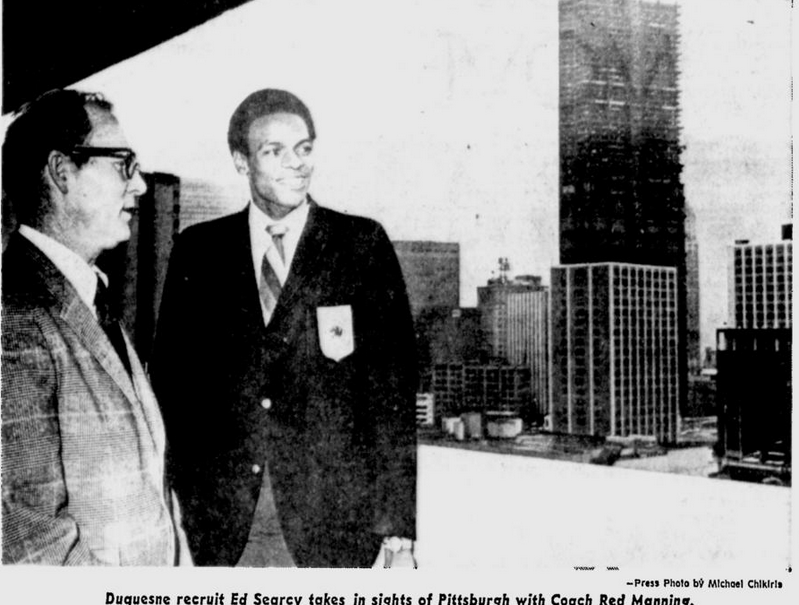 However contrary to his initial take, Ed wound up transferring out of Duquesne early on, citing being homesick.  Ed didn't object to the 5 days of the week dedicated to classes and basketball, but it was the weekends that drove him crazy:

On weekends we sit around in the dorms and everyone else goes out with their girls.


He decided to return home, and this time, stay local by attending St John's University (he was also known for wearing 7 pairs of socks while at SJU!).  His stats weren't available on basketball-reference but from all the articles I read, Searcy was a relentless rebounder and very good scorer.  Standing 6'6 probably had him playing one of the forward spots in college (of course in today's height-challenged NBA, he'd probably play center).

After a career with the Redmen, he was picked in the 5th round of the 1974 draft by the New Orleans draft.  However he never appeared in any games for the Jazz and was waived by them.  One year later, he'd latch on with the Celtics.

During his Celtics' tenure, he'd appear in 4 games for a total of 12 minutes.  He scored 6 points and had 4 fouls.  His NBA career was over.

So why didn't Ed play more than games that year?  A lot of times we come to these crossroads and being that information on these guys is so scarce, we're left with more questions than answers.  That's not the case this time, as it looks like our answer is very public online:

Ed Searcy was indeed a good college player, but when he became part of the Boston Celtics, he was immediately "outgunned" by Tom Boswell, the rookie forward from South Carolina. Then-coach Heinsohn praised Boswell's skills saying "The kid has more talent than anyone on the squad and is as strong or stronger than Paul Silas. The game until now has been too easy for him, he could be a great one". Unfortunately for the Celtics, Boswell wasn't good enough to become one of the greats, but he was good enough to push aside Ed Searcy, who would eventually play a marginal role in those Championship season, and then would be released, not finding any other NBA team willing to give him a second chance. 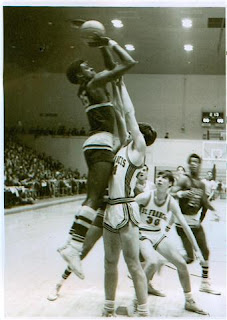 [Boswell's been on my radar for WTHHT for quite some-time; been trying to track him down.]

So what the hell happened to Ed Searcy?  Well I really wouldn't have known unless for his fubar.com profile where he has the handle "TallBlkMature."  I'll let Ed take over:

Former pro BB player for the Boston Celtics!!...yep and can prove that!!

Enjoy meeting all people, in person or here "cybering'

Ed also does volunteer work at the Beyond Basketball Foundation, a non-profit organization and parent of the Harlem Kings Basketball team in NYC.  He has a daughter named Elleesha. 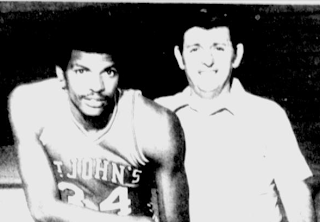 But Ed's not done!  In fact he's on another big social networking site, blackplanet.com.  Ed gives himself another social network introduction:

I`m a single Black male that resides in New York City. I have been here on the Planet for a while & have met some very interesting people.

I am single,college grad. from St. John`s U, with a MA from NYU. A real estate professional & IT professional.

Also I`m proud to say a former "Boston Celtic". In fact I have something Patrick Ewings wants...a RING!

My main competitive interest now is in the game of Chess. So if any of you inhabitants of this Planet feel that you are a good..... to a great chess player get in touch by writing a note.

I play mostly at the park famous for where the only Afro-American GrandMaster chessplayer has come from... 141 Street & St. Nick Ave. New York City.

Gotta LOVE the Patrick Ewing line!  Maybe if you're in Harlem one day, you can stop by 141st & St Nick and say hi to Ed who may be there playing chess.  Celticslife thanks Ed for his time with the Celtics.

Oh and Ed by the time you type your name into Google.com, this will be the article on top ;-)

**Addendum 5/15**: In case you can't make it to St Nick's park, you can watch Ed masterfully play chess right here!