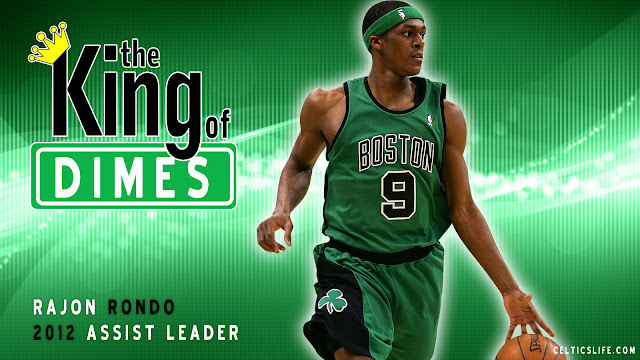 In honor of Rajon Rondo the 2012 NBA assist leader (and the first Celtic to do so since Bob Cousy in 1959-1960), CelticsLife.com brings you the Rajon Rondo "King of Dimes" wall paper.We hope you enjoy it!

More on Rondo being this season's top assist machine from ESPN Boston:


Until Thursday night, (The Celtics) had had only one assists leader -- and that was 52 years ago. Bob Cousy led the NBA with 9.5 dimes a game in the 1959-60 season. That was the last of eight straight seasons the Cooz led the league in assists.

But now Cousy has another Celtic with whom to share the honor. Rondo joined him after another eye-popping evening, dishing out 15 assists in the Celtics' 87-74 victory over the Milwaukee Bucks and taking the assists crown from Steve Nash with an 11.7 per game average. Nash averaged 10.7 per game.

Rondo could have sat out Thursday and still won the crown, but both he and Doc Rivers felt the point guard needed some time for rhythm and conditioning purposes. Rondo had not played since April 17 and, according to Rivers, had not done much of anything from a basketball standpoint since then.