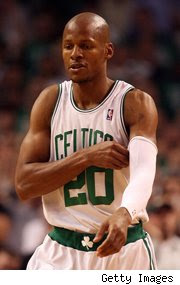 
If the playoffs weren't starting on Sunday, Ray Allen said he would get surgery on his ankle. He'll need to have a procedure one way or the other at the end of the season.

"Yeah, no question. If I could I would get surgery tomorrow," Allen said before the team conducted practice. "If this was earlier in the season I probably would have had surgery on it."

Allen will make the trip to Atlanta, but it's looking less and less likely that he'll be able to play.

Allen hasn't give up hope.

"These are extreme situations. Extreme times," he said. "Playoff basketball is a few notches above what we do in the regular season. It’s really a matter of me getting my legs underneath me, running when I can, but that’s the difficult thing."

Well we've been through this before the past few years. First with Kevin Garnett in 2009 and then Shaq last season. Player gets injured, we're told it's not that serious and he'll be back soon, postponement after postponement, and then he's out for the year. Hopefully Ray will be different and can at least give us something. Problem is the bone spurs just won't let him do basketball activities. I mean he can get cortisone shots and walk fine, but walking and playing basketball are two very different activities.

A huge part of Ray's game is based on cuts in order to get open. My guess is when he attempts them now it feels like someone sticking a knife in his ankle. We'll see if Ray can come back and if he does how long he'll be able to last. Luckily we have a decent amount of depth at the backup guard position in Pietrus, Pavlovic, and Daniels, but of course none of them are of Ray's caliber.