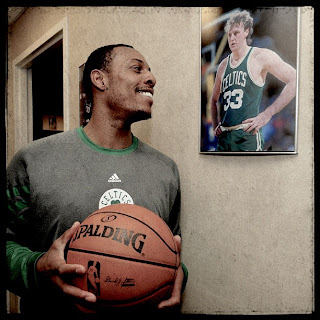 Would (Pierce) consider retiring after his 14th season in Boston despite having another two years and more than $30 million left on his deal?
"It's crossed my mind," Pierce told MacMullan. "I've played a lot of years, ran a lot of miles. You just gotta wait and see what's going to happen this year. You never know what direction this team is going to head in. You don't know what Kevin is going to do, don't know what Ray is going to do. This team could be in a rebuilding situation starting this summer. Like I said I always wanted to retire a Celtic, so who knows."

Personally I'd be shocked if Pierce retired after this season. I think he knows that Danny Ainge would trade anyone, that he'd trade his own wife if he thought it would better the Celtics, so Pierce wants to keep his options open. Putting the idea out there that he would be willing to retire also helps Pierce have some say in where he gets traded. If a team like the Nets thinks Pierce might just retire if traded there, they are then less likely to pursue him.

This is where I think Danny is way off in how he views this. I don't mind the Celtics players looking out for themselves, because they know they're not getting the loyalty back in return. I prefer how the Suns handled things with Steve Nash. They said they'd only explore trading him if he requested it. I know Pierce has lamented that that's not how things are done in Boston. I do believe as a Celtics lifer and one of the best players to wear the uniform for his entire career, that Ainge should be treating Pierce with more respect. And who's to say a future marquee free agent might not turn down the Celtics because they fear that Ainge might just trade them in a couple years. Loyalty does count for something.