Ray Allen has bone spurs in his ankle 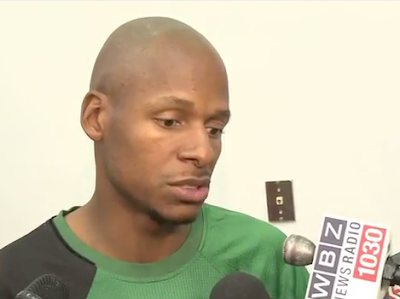 The Celtics conducted practice on Monday, but did so with Ray Allen (ankle), Mickael Pietrus (knee), Rajon Rondo (back) and Greg Stiemsma (foot) all watching from the sidelines. The Celtics still have a chance at grabbing homecourt advantage in the first round of the playoffs and coach Doc Rivers said he would play Kevin Garnett and Paul Pierce and any other player who was ready.
However, while Rondo and Pietrus could return to action on Tuesday when the Celtics play Miami, Allen is definitely out. Allen ran on Monday on an AlterG machine that lessens the impact, but he's been dealing with swelling in his ankle since he tried to return last Tuesday against the Knicks. Allen went through shootaround that day but his ankle swelled up after the workout.
"New York, I was frustrated," he said. "Other than that, just give it time and see what it does. Confidence-wise, I can’t do any more than what my body allows. I just try to live with that and just take the time to allow it to heal."
Allen said he hasn't had an X-ray, but an MRI revealed bone spurs.

"They say it could be the size of a grain of sand but they’re not supposed to be in there," Allen said. "As they swell they move around and when the swelling goes down, they rest."

I've stated before that if healthy the Celtics can contend for the title, but as the playoffs are about to start 50% of our 8 man playoff rotation is banged up. All the injuries are pretty major. Rondo is our best player and has a back issue, which is always a big deal (Just ask Larry Bird). Pietrus has had lingering knee issues and Stiemsma the same, but with his foot (Ask Shaq about feet). Ray was shut down for the season the year before he became a Celtic due to knee issues.

I'm sure Rondo will be available for Game 1, but we need top 10 NBA player Rondo, not just top 10 point guard Rondo if we want to compete. Stiemsma I would guess will be able to give it a go, but Pietrus is a question mark. Then Ray is huge issue. It's actually possible we've seen the last of Ray in a Celtics uniform. I mean it's possible as well that he plays in Game 1, but the Celtics don't have the best history when it comes to late season injuries and letting the public know the real deal. In 2009 we were told KG would be back and he never returned. Same thing last year with Shaq (who only had a cameo in Round 2).

So I wouldn't carte at all about home court advantage if I was you. I'd be checking for the medical updates. They will give you a better picture of how far this team can go.