Hawks to get boost with Al Horford return 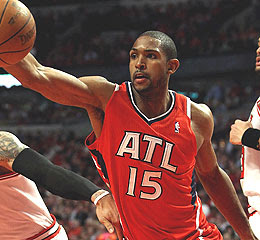 Al Horford changes mind telling Yahoo! he will return to action in limited fashion 4/26 vs DAL after doc meeting. The Hawks forward-center told Y! Sports in the morning he didn't expect to return from the postseason due to pectoral injury suffered earlier this season. But doctor told him some pectoral weakness is normal and not to be fearful of it, which led Horford to changing his mind and becoming more confident for return. He will play about 15 minutes per game in 1st round.

Well this sucks, because Horford is a very good big man and completely changes the Hawks team. You could say, "Well he's only going to play 15 minutes a game," but how often do players and coaches really adhere to those limits? The Hawks are a much better team than they've shown us the past couple weeks and with the return of Horford and the Celtics injury woes, Boston getting out of the 1st round with ease isn't as much of a given as it once appeared to be.

It's official, Celtics to play Hawks in 1st round