Bradley and Bass help Celtics cruise past Nets 94 to 82 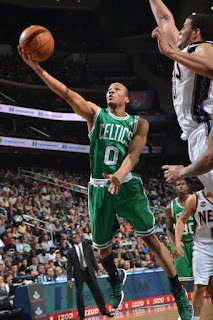 The Celtics had fallen down by as much as nine early in the game, but a strong third quarter had the C's pulling away from the New Jersey Nets in New Jersey, and they coasted to a 94-82 win. It was the last game the Celtics will ever play in New Jersey, as the Nets will be moving to Brooklyn.

The Celtics (35-25) shot 45.7% from the field and out-rebounded the Nets 51-42. Kevin Garnett led the team with 21 points and 12 rebounds while Avery Bradley chipped in 18 points - including three straight three-pointers in the third quarter - to help Boston build a lead as high as 17 in the second half. The Celtics never gave up the lead again after taking it in the third quarter.

Brandon Bass had a double double with 18 points and 11 rebounds and blocked two shots while Rajon Rondo dished out 15 assists. Paul Pierce (17 points) came up hobbling with 4:32 to play in the fourth quarter, his status bears watching for tomorrow's game. UPDATE: He probably won't miss any time.

After falling behind by nine early in the game, the Celtics eventually retook the lead in the second quarter. Their lead hovered around two but a long buzzer beating three from former Celtic Gerald Green tied the game at 48 at the half. Green ended up leading the Nets (22-39) with 15 points on 6-of-14 shooting. Deron Williams had a double double with 12 points and 14 assists.

Another player with Celtic ties, Marshon Brooks, scored 13 points for New Jersey. The Celtics had traded Brooks at the draft to pick JaJuan Johnson. In the beginning of the year this received a lot of criticism but you have to wonder if Bradley could've developed how he has if Brooks had been on the team.

Sound off on the win below in the comments. Follow us on our Google+ Page.