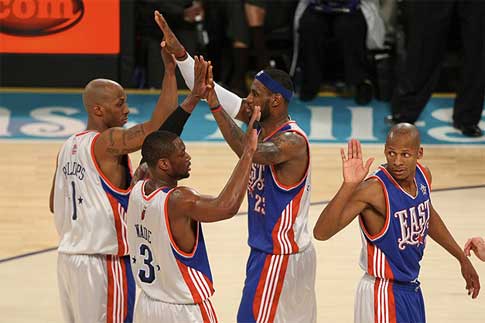 
Allen’s free-agent options are up in the air. The Miami Heat are expected to make a strong run at signing him this summer, one league source said.

“First of all, the team has to be willing to have me back,” Allen said. “Then you have to look around to see what’s acceptable and who is capable of having me on the team and then you go from there. It’s hard to really say.”

I think the first thing you can take from this is the idea that Ray and/or KG would sign with the Celtics for the minimum is a fairy tale. Allen will stay in Boston if their offer is competitive, but another team could certainly steal him.

“I’m always sentimental with them,” Rivers said. “I won a title with them and lost another one in a Game. 7. I think people assume they won’t be back next year. I don’t know why there is that assumption. [Garnett and Allen] are free agents, but you can sign your own free agents last time I checked.

“I don’t know if we will sign them both. We may sign one. But they’ve been great for us. Our [free agents] are probably the best ones and we will have the most money.”

Rivers said he believes Garnett’s preference would be to return to Boston. “When he doesn’t think he can help a team, he’d stop playing,” Rivers said.

The Celtics are in a tough situation right now. They can't rebuild through free agency, since all the top young free agents are now off the market or not interested in Boston. They can't rebuild through the draft, because the team is still too good to snag a top draft pick and trade wise they can't add another star next to Rajon Rondo, because the only asset teams really want is Rondo.

Regarding Ray, I'm sure a lot of teams will be interested in him. Shit a lot of teams were interested this winter in Rip Hamilton, and Ray's a better player. The main reason I see Ray leaving is length of contract. A team like the Bulls, Clippers, or Heat can give Ray a 3 year contract and not sweat it. The Celtics eventually do need to get out of this limbo situation and rebuild and I can't see the Celtics offering Ray another multi year contract. Another option to watch for this summer is a sign and trade deal.

Thanks Rodrigo Stücker for the tip.