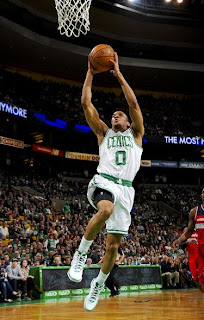 The last time Avery Bradley played 40+ minutes in a basketball game it was without a doubt far away from the TD Banknorth Garden. However, the second year pro got the starting nod in place of the injured Ray Allen and took full advantage of the opportunity. Bradley scored 15 of the Celtics first 21 points en route to 19 first half points and 23 total on 9-14 shooting.

With the defensive minded guard in the starting lineup, we may have gotten a glimpse of the green future. With the Bradley-Rondo backcourt, the Celtics featured a previously unseen dimension. Fans have long wondered what Rajon Rondo could do with a young, athletic guard with slashing abilities by his side. As much love as we have for Allen, it has been many years since he boasted all three of those traits.

Many of Bradley's open chances were the result of Rondo passes, and his offensive explosion forged a big lead for Boston early. Aided by good bench play from Greg Stiemsma, the Celtics built a 20+ point lead in the second quarter and led 53-34 at halftime. Stiemsma posted 10 points and 7 boards, along with his standard shot-altering defense.

Boston came out of the break flat and let Washington cut the lead to 10 before Doc Rivers called for a timeout at the seven minute mark. The lead hovered around there for much of the rest of the game until a late fourth quarter surge by the Celtics starters put the game out of reach.

Paul Pierce didn't score his first points until a jumper hit nothing but net with five minutes remaining in second quarter. However, the captain displayed timely shooting down the stretch and was immense in repelling the Wizards advances, finishing with 21 points.

Rondo was held to four points however his 11 assists, and strong defense on John Wall, (5-17, 12pts) were keys to the victory.

Boston once again allowed an outlandish amount of second chance opportunities, (14 OREB) the difference between this game and Friday's was the Wizards inability to capitalize, shooting just 35% from the field.

Jordan Crawford led the Wizards with 20 points, while Kevin Seraphin had the game's only double-double with 15 and 11.

The Celtics improve to 26-22, and for the moment sit one game behind Philadelphia (in San Antonio tonight) in the Atlantic Division.

Ray Allen (ankle) and Mickael Pietrus (concussion) will both miss tomorrow's game in Charlotte as well, which should mean more playing time for Bradley and perhaps more chances for us to travel ahead in time.