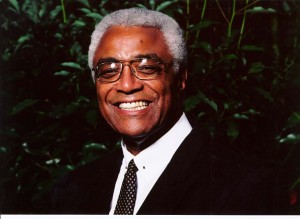 He was an All-American at UCLA and later won three NBA titles with the Celtics. After a long and storied sports career, he came to understand his mother’s teachings about faith in a whole new way through a fresh encounter with God.  This week in WTHHT we remember Willie Naulls.

Willie Naulls was born in Dallas, TX in 1934 during times when racism was prevalent.  Willie's mother's unyielding faith in God taught Willie to see his uniqueness in the image of God.  “I was taught not to hate the people who hated me because of the color of my skin, but to pray for them and God would work it out.

From a young age Willie's mom also instilled in him a strong work ethic.  “She taught me that nothing is worth having unless you work for it.  She was totally against welfare unless people couldn’t work.” 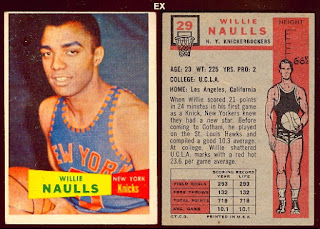 [Nothing is worth having unless you work for it?  Just don't tell that to Yogi Stewart].  As a result, seven-year-old Willie got his first job delivering ice blocks in the days when many homes still had iceboxes rather than electric refrigerators.  He was a big kid for his age, but his boss overestimated the boy’s strength by allowing him to haul a 50-pound block on his back. As a horrified woman watched in her kitchen, Willie’s knees buckled at an inopportune moment, which sent the ice careening across her linoleum floor. The resulting crash took out a wood burning heater in a cloud of soot. His feet never moved so fast as the panicked youngster raced home.

As I've done for Zaid Abdul-Aziz and Gene Conley, I was interested in learning more about Naulls before writing this.  Amazingly Willie has written 5 books which you can find here.  I looked up the first one titled Levitation’s View: Lessons Voiced from an Extraordinary Journey on Amazon and it was selling for 1 cent (+3.99 shipping).  However this book only discusses his life growing up.  Volume 2 meanwhile discusses his time in college and the bond he formed with John Wooden.  Since I'm most interested in their NBA career and specifically their time with the Celtics, I decided to pass on it.

On Saturdays, work took priority over playtime. “We had to shine our own shoes, iron our own clothes, and fold them up before we could go out to play.” It was part of the weekly ritual to prepare for the Baptist church on Sunday morning and school the following day.

When he was nine, the family moved to Los Angeles and settled in a government housing project filled with shipyard workers in San Pedro.  By the time he was 11 he began to excel in dodge ball.  Then came baseball and football at San Pedro HS, the latter which Willie thought was his best sport.  That was until the basketball scholarship came from UCLA and John Wooden. Naulls captained his team at UCLA and then earned an All-American selection in 1956. He would be drafted by the St Louis Hawks in the 1956 NBA draft.  But during his first season he was shipped to the Knicks for Slater Martin.  Naulls played for the New York Knicks in six-plus stand-out seasons. He earned four NBA All-Star berths and became the first African-American team captain in the history of integrated professional sports. Bill Russell, who played center for the Boston Celtics, spoke up on Naulls’ behalf, and urged him to come over and play for the Celtics.  So after Naulls was shipped west to the San Francisco Warriors, the Celtics would eventually buy him from San Francisco in 1963.  Willie would play 3 seasons with the Celtics and win three championships from 1964 through 1966.


After his professional basketball career ended, Willie first went into business in Beverly Hills.  He owned an auto dealership, had built homes as a general contractor, and was a contract negotiator for professional athletes.  He and a group of investors were getting ready to buy several more auto dealerships in a multi-million dollar transaction when God derailed his self-made plans. Naulls was cruising down the 405 Freeway when he received a message like no other.  It was as if God spoke directly to his heart. “Get out of business. Better prepare yourself to minister My Word. Tell people what great things I have done in your life.”
Naulls almost drove off the freeway. “I was skeptical of people who said they talked to God or heard from God,” he notes. “I thought they were trying to demonstrate they were more spiritual than I. I never believed them.” 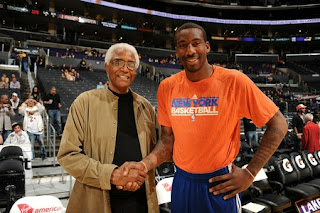 While his business partner laughed and suggested he ate some bad Mexican food, Naulls’ wife took the message seriously. “We know it’s God, so you better do what He tells you,” she said. Within six months, he was out of the business world.

Naulls attended Fuller Seminary, then served as an associate pastor at Antelope Valley Christian Center and director of college ministries at Brentwood Presbyterian Church.  He then started Willie Naulls Ministries, a Christ-centered ministry that inspires young people by teaching hope and promoting a balanced awareness of the importance of academic, physical, and spiritual achievement.

Today, much like Andrew DeClerq, Bart Kofoed and Jimmy Oliver, Willie continues to be very involved in his faith.  Not too shabby for a former 4 time NBA All Star and 3 time NBA Champion.