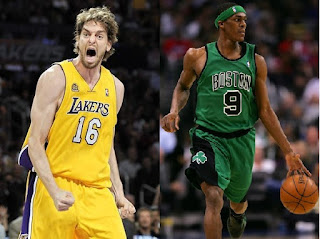 According to Peter Vecsey of the NY Post, the Lakers would be more than interested in acquiring Rajon Rondo from the Celtics.

If the Lakers indeed are interested in signing Rasheed Wallace — a logical step-down from flirting with Gilbert Arenas—it lends credence to the Rajon Rondo/Jermaine O’Neal-Pau Gasol swap I keep hearing. Lord knows they’re desperate for a point guard and Rondo is exceedingly obtainable and Kobe Bryant loves his “any means possible” style.

Take this rumor as a grain of salt, considering it comes for a journalist with a long history of controversy behind him. Having mentioned that, it is worth to say that this is the second time this rumor appears in the media.

Asked about this rumor in twitter, Larry Coon comented the following:

I think Lakers would want Bass. RT @HebertofNH: any credence to the ny post column in thinking that Gasol will go for Rondo/ Jermaine O'neal
— Larry Coon (@LarryCoon) February 26, 2012

Eric Pincus reported that anything between these two teams would have to wait until March 1st, precisely the day in which players signed before the season started -like Brandon Bass- would be elegible to be part of any transaction. I would guess more players would be included in the deal, like Jermaine O'Neal from Boston.

Get ready for the arrival of a vast amount of rumors in the next three weeks. Probably 90 % of all this will never be real, but it is worthy material for discussion.