This week in What the Hell Happened To, we go wayyyy back to the 1950s to remember a player who accomplished something that fellow alumni Detlef Schrempf and Brandon Roy were never able to achieve.  Today we remember "Hooks," Bob Houbregs.

Before being selected with the #2 overall pick in the 1953 draft by the Milwaukee Hawks, Bob was a standout player at the University of Washington.  He lead U-Dub to their only Final Four Appearance in 1953 and was a consensus All-American selection. 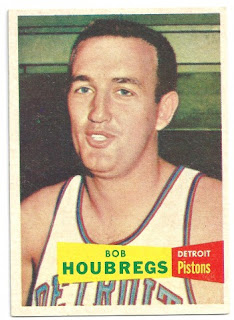 He wasn't quite the same scorer as a pro, averaging a pro-best 11 ppg each for two Fort Wayne Piston teams that advanced to the NBA finals, with a high game of 30, twice. He played for the Celtics during the 1954-55 season but his stats are merged with the other teams he played with (Baltimore Bullets and Pistons) that year.  The Celtics had selected him out of the dispersal draft from Baltimore.
For that season he averaged 6.6 points and 4.6 rebounds in about 20 minutes per game.  He'd go on to play 3 more seasons with Fort Wayne/ Detroit before his career came to a sudden end after he ran into a basket support, severely injuring his back.


"I got up and continued to play, but the next game I bent over and tried to get the ball off the floor and couldn't straighten up," he said.  "The doctors advised me that I should retire."

After retiring from the NBA, Houbregs sold shoes for Converse before and after a near five-year stint as general manager of the Sonics (the Thunder for all of you introduced to basketball after 2009).  Today, the former Huskies center lives in Olympia with his wife of over 50 years, Ardis. They set up residence in the state capital to be near the family of one of their four grown sons, specifically two adopted grandchildren from India.

It should be pointed out Bob is the second WTHHT featured player (in addition to Artis Gilmore) to be inducted into the Hall of Fame, in 1987. He was also inducted as an executive for his work with the Sonics.