Starting Fresh Against the Injury-Depleted Nets 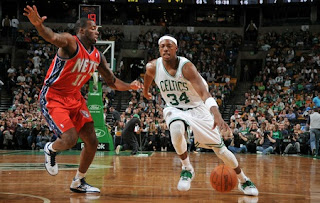 After starting the season 0-3, the Celtics have bounced back to win their last three games since Paul Pierce’s return to the floor.  As far as I’m concerned, the (lack of a) preseason that the Celtics needed to get comfortable is finally over, and they can use tonight’s game to keep improving while gaining a fourth straight win, and their first winning record of 2012. New Jersey’s frontcourt is in shambles with center Brook Lopez out for a couple months with a broken right foot, while forward Kris Humphries will miss his second straight game with a sprained left shoulder.  All-Star point guard Deron Williams will also be inactive for tonight’s game, and so will Ray Allen for Boston.


Pierce’s return has made things much easier for Rajon Rondo and the other Celtics on the offensive end, and so has has the eternal precision of Allen’s jump shot.  However, with Allen likely missing tonight’s game with a mild sickness, Rondo and Keyon Dooling will have to hustle to help spread the floor quickly and efficiently.  Fortunately, Rondo appears to have finally mastered the duality of his slashing ability, knowing precisely when to dish and when to shoot, and has so far helped players such as Dooling, Bass, and Stiemsma to look more adept on offense than many of us would have ever expected.  He will have to demonstrate this ability tonight.


Jermaine O’Neal is also expected back tonight for the C’s despite missing their last game due to a sore hamstring, and that does not bode well for a New Jersey team that will be starting big men such as Mehmet Okur and Shelden Williams.  Rondo, Pierce, and Garnett will frequently find themselves guarded by players who are incapable of guarding them, and with Allen out, rookie guard E’Twaun Moore may get the opportunity to show that he has already likely surpassed Avery Bradley on the learning curve.  Hopefully we don’t see too much of Sasha. 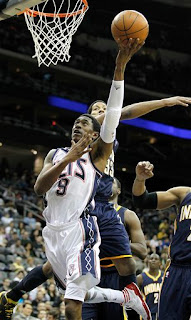 The guy to watch out for is rookie MarShon Brooks, who is starting in place of D-Will.  Brooks is an intriguing 6’5 guard who is quickly establishing himself as a legitimate scoring threat in the NBA, and is coming off a 21 point and 7 rebound performance against Indiana.  Brooks can put on a show, the same way other young athletic talents such as Iman Shumpert, Norris Cole, and John Wall have against Boston.  However, one guy is never really enough to beat the Celtics, and solid performances from Rondo, Pierce, and Bass will likely shape the outcome of this game.
The Nets have lost five in a row, and that streak should be extended tonight.  Meanwhile, the Celtics are well positioned to jump out to an early lead in the Atlantic Division.  They will look to further establish their new team chemistry and careful distribution of minutes this shortened season, as they pursue yet another playoff berth.  Meanwhile the Nets (1-5) continue to struggle mightily, while the Knicks (2-3) continue to win about half their games.