Pacers rebound by dismantling the Celtics 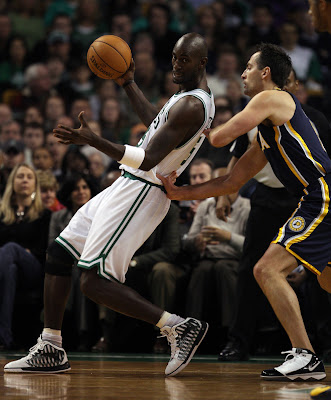 The Celtics had one of the most forgettable games you could imagine.  The Pacers came into Boston and beat the Celtics 87-74.  I have not seen this lack of effort in a long time from the Celtics who were not missing anyone due to injuries.  Paul Pierce struggled all game in one of the slowest paced games you will see at the Garden.

Indiana starts Darren Collison, Paul George, Danny Granger, David West and Roy Hibbert.  It’s fair to suggest that David West wouldn’t have started on the Celtics, which was another factor in his decision.  The Pacers are coming off an embarrassing loss to the Miami Heat by close to 40 points in a game they rolled over in.
Both teams have started the game cold.  The Pacers are shooting 18.8% with 13 missed shots already.  Boston is shooting 46.2% but shouldn’t breathe too easy as they only lead by 5 points.  The Celtics should have a larger lead with the shooting percentage differential.  Boston has to continue to be aggressive as Indiana’s bench is very deep led by Tyler Hansbrough.
Indiana has not scored a basket in the past five game minutes as they struggle to find their offense against the Celtics.  Boston likes their match ups as they have not used a zone defense until late in the quarter when their bench came in.   The Celtics keep shooting low percentage shots as the Pacers drop below the picks, daring the outside shots.
Continuing on from the previous game, the Celtics need to have more shot attempts.  15 per quarter will not be acceptable to win games.  The Pacers have shot 4 for 21, or 19%, however they are tied after the first quarter.   Even worse, 6 out of the 14 first quarter points for the Celtics were from fast break situations, making their half court offensive looking worse, 3 for 12, or 25%

Boston has only scored 25 first half points which is embarrassing.   Only shooting 26.5 percent will not cut it.  The poor performance on the offense end has allowed the Pacers to take a 33-25 half time lead.
The Celtics are on pace to break the record for lowest scoring game in the shot clock era.  The current record is 62 points scored by the 54’-55’ team against Milwaukee, which was played in Providence.  No one alive really remembers this game. I will throw out another poor performance to help understand.  The most recent awful performance was in 2003 against the Detroit Pistons, a game the Celtics scored only 66 points. The Celtics have scored 25 points in a half four times, twice in 95’ and once in 99’.
Doc Rivers calls an early timeout in the third quarter after he is not happy with the way the team started the second half.  Rajon has continued to push the ball and force himself into the paint, however we have not seen anyone else step up their level of play.  Celtics are now down 9 points with plenty of time in the third.


A few possession later and the Celtics have got within 2 points again.  Rondo is finally getting some support for his pressure with a couple of Ray Allen three pointers in the corner.  The home crowd has finally awoken to help the home team.  The beautiful roars of the Garden are something magical.  The players feed of this energy.
Jermaine O’Neal took himself out of the game with pains to his chest.  He has gone to the locker room with the injury.  He got hit hard in the chest fighting for a rebound underneath, most likely an elbow.   Fan favorite Greg Stiemsma has come in for Jermaine.
The Pacers have now pushed the lead back to seven with 1:31 remaining in the third quarter with the score 58-51.  Rajon Rondo and the rest of the team have resorted to arguing with the officials instead of playing the game.  They continue to get boxed out for rebounds and beat on picks and screens. The officials will never win you the game.
Boston has done more in the third quarter then they did in the first half, however the first half was too appalling.  The Pacers are dominating the glass with fourteen more rebounds than the Celtics through three quarters.  Indiana leads Boston by the score of 63-55.
In the fourth quarter, one play has defined how they have played so far.  After the Pacers missed a shot, Kevin Garnett and Avery Bradley let a rebound bounce to the floor multiple times. Jeff Foster then picked up for an easy basket.  Indiana has two players in double digit rebounding and the Celtics have none. The Pacers bench has outscored Boston’s so far 33 to 9 as they lead 75-65 with 6:12 left to go.
The Celtics continued to provide false hope as we are at the 3:39 mark as they trail Indiana by 7 points.  Boston has ruined any chance to get back in this game by complaining to the officials instead of improving in areas that they need.   The Celtics have not looked this bad this season, even in New Orleans they played with a little more heart.  George Hill and Tyler Hansbrough have done a fantastic job in this game both scoring in double digits being the difference makers of this game. 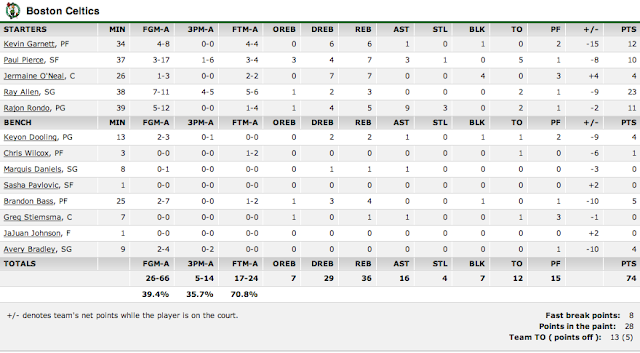