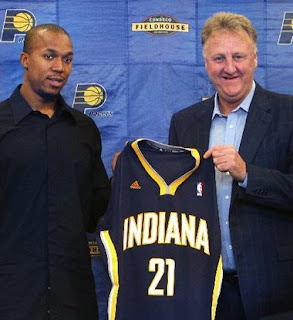 The Celtics will square off against the Indiana Pacers tonight, the first time playing against David West after he choose to sign with the Pacers after agreeing to a contract for less money with the Celtics. Ray Allen sounded off on the move in December, which left him baffled when he spoke to Jackie MacMullen:

"I'm shocked," Allen said. "I don't understand it." [...] Allen first heard of West's potential interest in Boston last month when Allen was playing golf in Augusta with his private banker, who coincidentally also handled West's financial affairs. "He told me how much I would love [West], that he and I were the same kind of guy -- cognitive thinkers," Allen said. "He said West was interested in coming to the Celtics and would be willing to come for less." So why does Allen think West had a change of heart? "Once it got down to the end, I think his ego kicked back in," Allen said. "He wanted the dollars. I guess it comes down to 'What is a championship worth to you?'"

David West responded to these remarks before the game in Boston. West talked about everyone being realistic about the Celtics window, because David is only 31 years old and the Celtics are dinosaurs.

"You know, I just think that -- I think everybody's kind of realistic about the window that the Celtics have," West said. "I think, me, looking at where I am, I think my window's a little bit wider. I'm only 31, so I figure with this young team here, in the next few seasons we have the pieces to be able to compete. We've talked about it -- maybe not this year, but definitely in a couple years. In terms of maturity and keeping this core together, the pieces are here to get up there."

Well there you have it, a little trash talk to start the game.