Is Austin Rivers Destined to be a Celtic? 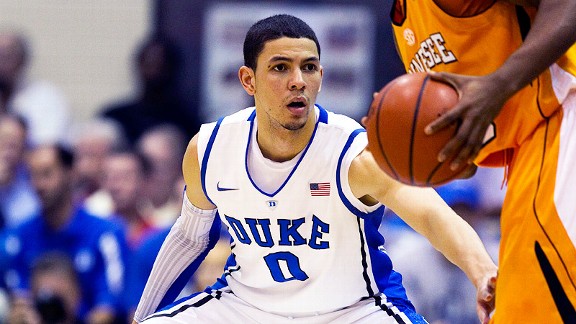 With some top Freshmen from last season remaining in school due to fear if the lockout, this draft should be stacked. A freshman with Austin River's talents and potential typically wouldn't last late in the draft enough for the Celtics to pick him. But with a deep draft, the Celtics struggling, and an extra pick in this year's draft, if the Celtics decide Doc's son is their guy, they very likely have the ammo to get him. And the Celtics aren't hiding their interest.
WEEI

At the tail end of Doc Rivers‘ weekly interview on WEEI’s Dennis & Callahan Morning Show, the Celtics coach opened up about the possibility of coaching his son Austin Rivers in the NBA.

The best prep guard in the country as a high school senior last winter, Austin Rivers averages a team-leading 13.8 points per game for No. 4 ranked Duke this season, shooting 43.6 percent from the field and 37.7 percent from beyond the arc. Once projected as a surefire lottery pick, his stock has slipped to No. 21 on ESPN draft analyst Chad Ford‘s Top 100 NBA prospects list. So, what must improve for him to have an impact at the next level?

“Just his whole game,” said the elder Rivers, who despite running practices for their teams once or twice has never coached his four kids. “I think he can score in this league right now. I don’t think he could have any problem with that. I think defensively — just the knowledge on the weak side of the ball — is where he would have to improve.”

Rivers will go higher than #21. I don't care what Chad Ford says. But if Ainge liked another highly touted prep player Avery Bradley at 19 a couple years back, he has to like Austin right? Basically the Celtics can have Austin if they want him. If he gets hot the rest of his Freshman season and vaults up in the draft they can trade 2 picks to move up in the draft. If he struggles and some how falls to the late teens then they can simply draft him outright.

As long as Austin doesn't somehow become let's say a top 7 player, I think he's 100% attainable and I'm 100% on board with bringing him in. You know Doc won't play the nepotism card. The only problem might be that Doc would be extra hard on his son and then Doc would have to deal with his wife getting on him for that. So besides a little dinner time tension, to me it's a slam dunk (overused basketball pun not intended).

So what do you think? Do you want to see Austin Rivers wearing Celtics green next season?