Ainge: "If I were presented with (good) deals for our aging veterans, it’s a done deal to continue the success." 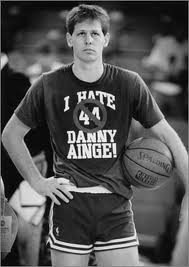 Boston General Manager Danny Ainge spoke with the Boston Globe regarding the possibility of trading the Celtics' Big Three. And he isn't afraid to do so if he is presented with a deal that will bring young talent to Boston.

Ainge said he would consider trades if they would net younger talent. He has maintained he does not want the franchise to go through a 10-year span of insignificance as it did following the departures of the previous Big Three of Larry Bird, Kevin McHale, and Robert Parish, who remained with the team past their primes.

"First of all it’s a different era," Ainge told the Globe. "I sat with Red (Auerbach) during a Christmas party (in the 1990s). Red was talking to Larry, Kevin, and myself and there was a lot of trade discussion at the time and Red actually shared some of the trade discussions. And I told Red what are you doing? Why are you waiting?

"He had a chance to trade Larry (to Indiana) for Chuck Person and Herb Williams and (Steve) Stipanovich and he had a chance to trade Kevin (to Dallas) for Detlef Schrempf and Sam Perkins. I was like are you kidding? I mean I feel that way now. If I were presented with those kind of deals for our aging veterans, it’s a done deal to continue the success."

Ainge said he does not want a repeat of the 1990s in Boston.

"After those guys retired, the Celtics had a long drought," he said. "But those (types of fruitful trades) aren’t presenting themselves. In today’s day and age with 30 teams in the NBA, 15 teams know they have no chance of winning a championship. They are building with young players. It’s a different era that we live in. It’s easy to say conceptually but you have to always weigh what are real opportunities."

Luckily, Danny said he will be patient in assessing whether or not the team can compete among the East's elite. So hopefully he has learned from last year's knee-jerk Perkins trade and will give the options he has in front of him more thought than last year. Read the full article at Boston.com...