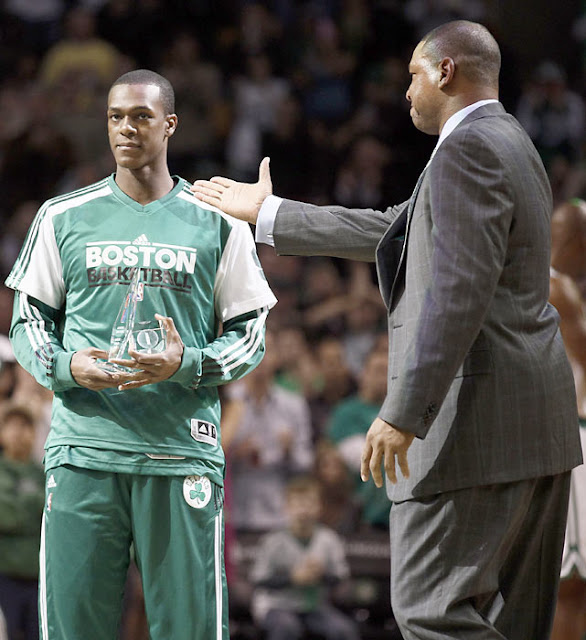 Sports Illustrated
The Boston media market is at it once again.  Notorious for blowing stories out of proportions and running stars out of town, the media has not stopped talking about rumors and second wind stories on Rajon Rondo.  The latest bulletin comes from Steve Bulpett from the Boston Herald:

According to multiple sources, Rondo’s errors were being pointed out when he arose and began discussing the mistakes of his teammates. Loudly. Using harsh language.Coach Doc Rivers got up and fired back, and Rondo threw a bottle that shattered the video screen. He bolted from the practice facility and was prevented from returning when he tried later.

This is not the first accusation that has been brought to the public regarding Rajon Rondo.  He has been ousted since his Kentucky days, where he had not got along with Tubby Smith, the coach of the Kentucky Wildcats.

He clashed with Tubby Smith, his coach at Kentucky. He couldn't shoot from the outside and was a terrible free throw shooter.

"Sometimes not getting along with your coach is not a bad thing," Ainge said.

ESPN
He was the one man who could prevent the big three from achieving their goal with his attitude and inexperience as a point guard, according to everyone.  After the championship, we learned some stories of the 2006-2007 season, courtesy of Jackie MacMullen:

Two seasons ago, before the banners and the plaudits and applause, when Rondo was in charge of a team that won just 24 games, he'd throw a no-look bullet and when it was dropped out of bounds he'd roll his eyes in exasperation. If he set up a shooter for the open jumper and it clanged off the rim, the shooter was subjected to the Rondo stare, a look steeped in disdain and aggravation.Rivers hauled his supposed floor leader into his office and asked him, "Do you know your teammates hate playing with you?"

"The point guard has to be the guy that brings energy to the team," Rivers chided him. "You can't be the guy that sucks it away. Your moodiness is affecting us. Change it."

And don’t forget all the team USA speculation that came in the summer of 2009.  Rondo left the team to attend his uncle’s funeral, never to return.  He was vocal against his dislike of Coach K’s style, which is not ideal for free spirited athletes, like Rondo.  This was never a good fit at this time from the amount of time it took Rajon to make his mind up all the way to his departure.
And now we are at the point of speculation. Do the Celtics want him or not? I think these trade rumors were only intended to land Chris Paul because he is a better player than Rondo. If Lebron James ends up on the trading block, you go after him, If Kevin Durant hits the block you do the same, and so on.
Danny would never trade his best player for depth, because essentially that was the Pacers offer.  Instead Danny went out and built the depth behind this team because he knows how good they can be.  The Sports Hub radio shows are all ready to trade him for pennies on the dollar, led by Michael Felger.  One suggestion to those who don’t watch basketball, don’t comment on basketball.
I love how this city gets out of hand.  Are the Celtics going to just ship him out for all the foretold stories?  Are any of these stories related to sex, drugs and rock and roll?  These are stories of a pissed off athlete because of failure, not off the court, but on the court.  Kevin Garnett saw this kids potential early and Danny Ainge saw it sooner. Talking about getting rid of a player to get worse because of his emotions and outbursts behind the scenes.  None of this has affected this team on the court.  You can't once look at Rajon Rondo and blame him for this team not winning in 09', 10' or 11', except the injury factor in 2011.
I can’t believe I spent a whole article defending Rajon without pointing out his two all-star appearances, championship ring, and vastly improving statistics. Just remember, whatever side of the fence you are on, no one can deny how important he is to Kevin, Ray and Paul.
"What they came to realize," said Celtics general manager Danny Ainge recently, "is they need him every bit as much as he needs them."