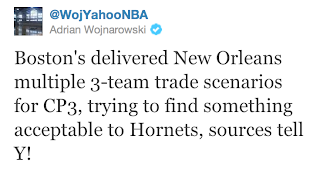 Seems like Danny Ainge isn't convinced that the Chris Paul deal is dead. That Celtic magic has worked before and it could work again.

Other reports suggest that some of the other teams involved are The Warriors and Indiana Pacers. One of Golden States new owners, Joe Lacob, used to be a partial owner of the Boston Celtics, Larry Bird is the GM of the Pacers. Just saying.

Wojnarowski is also reporting that the Clippers are not willing to give up Eric Gordon in any potential deals for Paul.