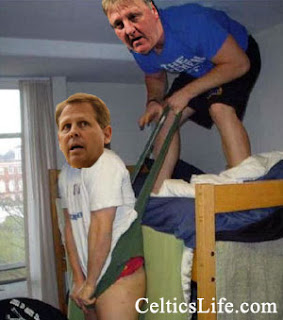 The latest update on the David West trade is that the Pacers are willing to fight Boston for him.  Who will win the battle between GMs Danny Ainge and Larry Bird?

According to Yahoo's Adrian Wojnarowski:


As free-agent forward David West and the Boston Celtics work to complete a difficult sign-and-trade deal, the Indiana Pacers have positioned themselves to sign the power forward should talks with the Celtics flatline on Sunday, league sources told Yahoo! Sports.

The Celtics have been discussing a four-year deal with West, sources said. Still, Boston is limited under sign-and-trade rules with how high it can go with an offer. The Celtics can offer the first three years in the $24 million to $25 million range, but the fourth year would likely not be fully guaranteed.

Several sources believed there would be a resolution Sunday.

Indiana has been discussing a two-year deal with West but with a higher annual salary, sources said. The Pacers have cap space to sign West outright, while Boston, which is over the salary cap, needs the sign-and-trade scenario to acquire him. With the Chris Paul to the Lakers deal falling apart again late Saturday night, the Hornets still hadn’t made any calls to pursue re-signing West, sources said.

The Celtics have discussed sending center Jermaine O’Neal, and possibly rookies E’Twaun Moore and JaJuan Johnson, to the Hornets, sources said. For the deal to work, the Hornets need to find a landing spot for Jermaine O’Neal’s $6.2 million contract. That’s a difficult proposition for a 16-year veteran with a history of injuries, but New Orleans has seemed confident it can do so.

West has been motivated to sign with the Celtics, where he can start on the frontline alongside Kevin Garnett. West, 31, opted out of the final year of his contract with New Orleans. He is recovering from knee surgery after an ACL tear ended his 2010-11 season after 70 games. West has been one of the NBA’s most reliable low-post scorers across his eight seasons in the NBA, averaging 18.9 points and 7.6 rebounds a season ago.