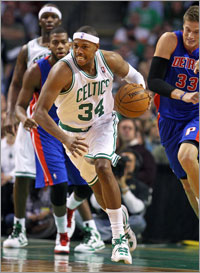 After a first half that was largely close, the Celtics opened up a lead as high as 25 after halftime on their way to a 96-85 rout of the Detroit Pistons friday night to get their first win of the season. It was Boston's home opener and the first time Paul Pierce (12 points, 5 assists, 4 rebounds) had suited up for the Celtics after missing the preseason and the team's first three games with a heel injury.

The 25 point lead was Boston's largest of the season. Jermaine O'Neal led the team with 19 points, seven rebounds and two blocks. Brandon Bass and Ray Allen each scored 17. Boston did not miss a single free throw, making all 19 they attempted.

Detroit was led by center Greg Monroe's 22 points and nine rebounds. They were held to 43% shooting from the field by a Celtics defense that had looked anemic at times in the opening three games.

Boston improves to 1-3 while Detroit will fall to 0-3. The Celtics next play at The Washington Wizards this Sunday at 6pm.