NBA Owner Fined for Wanting to End the Lockout 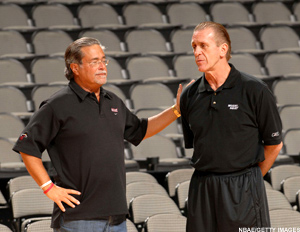 In another sign that the NBA has serious issues, Miami Heat owner Micky Arison was fined $500,000 dollars by David Stern for responding to tweets (See below). Arison is among the owners that don't want a lockout, but are being muted by the owners that want the season cancelled. See Arison is a businessman that knows how to run his businesses right. He bought his team. He hired one of the most respected basketball minds to run his team in Pat Riley and he stays out of basketball operations and let's Riley run things.

Riley in turn has continually pulled of shrewd moves to keep the Heat competitive, with the most recent being adding LeBron James and Chris Bosh to the player he drafted Dwyane Wade. So Arison and the Heat make money. In the previous collective bargaining agreement, players received 57% of BRI  and the owners 43% of BRI (That's basketball related income. Other income like cable tv deals go all to the owners.) The players already have agreed to give back 5% of BRI to the owners (so billionaire owners will increase their take home payments by nearly 12%. This in addition all the system issues that the owners will be benefitting from. Arison knows that the owners have won and wants the lockout to end.

Unfortunately the idiot owners that don't know how to run a successful business aren't satisfied yet. They want even more from the players. They want to make more money even if they hire poor GM's, or male poor decisions. Take the Cavs Dan Gilbert for example. The Cavs sucked and because of the NBA lottery system that benefits the inept run teams, the Cavs drafted LeBron James with the #1 pick. The Cavs had YEARS to surround LeBron with another star and failed time and time again. Then with their last shot during LeBron's final year, the Cavs turned down a deal for Amar'e Stoudemire, because they didn't want to give up J.J. Hickson. When free agency hit, without an Amar'e to be his sidekick, LeBron bolted. The only reason Dan Gilbert wants the season wiped out is because he has a bottom dwelling team. If he had LeBron and Amar'e he'd be singing a different tune. He'd be all set to play ball. Instead he wants Stern to bailout his team again.


You don't deserve to make money on your team Dan Gilbert. You've been a failure. Same with Robert Sarver over in Phoenix. You want to have a winning team? Stop selling draft picks like Rajon Rondo and wasting money on guys like Marcus Banks instead. So to get back to Arison, he's run his business well and  is tired of this mandated shutdown. Everyone knew he'd be fined. Stern put a gag owner on owners when the lockout started. It was still nice to hear an owner who "gets it" though.

I wonder what Stern is going to do with the extra $500,000. Don't hold your breath on it being used to bridge the current gap between the players and owners.
Chicago Tribune

It started with a post directed to his Twitter account that read, "Guess what? Fans provide all the money you're fighting over you greedy (expletive) pigs."

Arison responded, "Honestly u r barking at the wrong owner."

That response later was deleted.

That had the initial poster chiming in with, "Then can you bark at the other owners? This is RIDICULOUS!!!"

Arison then retweeted a post from another account that read, "Heat ratings proved that fans want to see super teams in big markets instead of a ton of small-market teams each with one st(ar)."

Another account offered, "NBA labor is a joke! You owners don't care about us FANS at all!," to which Arison responded on his account, "Wrong we care a lot."

Later, he retweeted the question, "are you allowed to comment about ur feelings on the small market/big market issues some of the owners bring up?" He replied, "No."