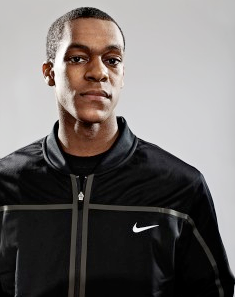 Officers called a flagrant foul on a 31-year-old Haverhill man who police say took a swing at Celtics point guard Rajon Rondo early yesterday during an appearance at a downtown dance hall.

Officer Michael Kandrotas noticed a scuffle, and learned that someone "took a fighting stance and threw a punch" at the Celtics all-star and his entourage, which included fellow NBA players Josh Smith of the Atlanta Hawks,former Celtic Nate Robinson and Rudy Gay of the Memphis Grizzlies.

Hayhurst was unsure what prompted the scuffle. But he said Rondo was "unpersonable" and "disrespectful toward patrons."

It was definitely provoked," Valarezo said, when contacted by phone last night. "I wasn't even intoxicated or anything like that."

A police report makes no mention of alcohol or intoxication.

Valarezo said he reacted after he was pushed, and didn't realize until later on who the other person involved was. He is not an NBA fan.

After the jump we have video of Valarezo finding out the man he swung at was Celtics star Rajon Rondo.